Financial squeeze imposed by Government will continue to erode capability 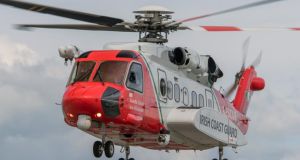 The Sikorsky S-92 helicopter, operated by CHC Helicopter for the Coast Guard, which crashed during a rescue mission off the west coast on March 14th. Photograph: Brian O’Loughlin/EPA

No one can have been untouched by the tragedy of Coast Guard rescue helicopter 116 and the loss of all four crew members.

The deaths of Capt Dara Fitzpatrick and her three, still missing, colleagues, pilot Mark Duffy, and winch operator Paul Ormsby and winch man Ciarán Smith, have been felt especially keenly by their colleagues in search and rescue throughout Ireland and by all of us who fly. It is in the nature of search and rescue that such tasks are conducted in often extreme conditions and using technology that can have catastrophic consequences when it goes wrong.

Having said that, there are some points relevant to the tragedy of Rescue 116 worth considering.

As the Air Corps has acknowledged, it was unable initially to assist last Monday because of staff shortages.

This is a problem of which I am aware, from personal experience.

I am a former Air Corps officer and pilot with 15 years’ service, having flown helicopters and fixed-wing aircraft during my service in the Defence Forces. I instructed within the flying training school for nine years, becoming the chief flying instructor towards the latter stages of this time.

The reasons why the Air Corps were unable to provide a “top-cover” aircraft to help with the medical evacuation from the trawler off the west coast, and which Capt Fitzpatrick and her Coast Guard colleagues were then tasked to do, is a simple matter of the Department of Defence allowing a near-continuous decimation of personnel within the Air Corps capable of doing what was required at the time.

The suggestion by Taoiseach Enda Kenny (repeated by the Minister of State with responsibility for the department, Paul Kehoe) that the Government was aware of the issue and that 28 cadets were in various stages of training is simply disingenuous and misleading, to say the least.

The implication that these 28 cadets will replace the years of experience being lost is simply unsustainable. I know from my experience in instruction that these cadets will take at least three years to train. Even then they will certainly not be qualified to fly the type of mission, such as a top-cover mission, that Rescue 116 was undertaking last week.

It takes at least six to eight years before a newly-qualified Air Corps pilot will have enough experience to fly most of the aircraft the corps uses, and closer to 10 years’ experience before he or she could take command of the twin-engined Casa CN235 whose help was requested at the outset of last week’s medical evacuation mission.

One might compare this to a newly-qualified junior doctor and a hospital consultant. It takes many years and a lot of experience to become a consultant. The same can be said for a pilot – and especially one with the expertise required to take a Casa out over the Atlantic giving top-cover support to a rescue mission.

While the numbers may eventually add up, those figures belie the reality that capabilities have been lost and safety margins have been eroded.

A major part of the solution to this lies in incentivising personnel to stay within the Air Corps. The potential financial gains that can be made by moving to the private sector have led to many experienced people leaving the corps (51 since 2010, including myself).

The Air Corps is not alone in facing this issue: most air forces around the world also face it. The difference is that in most other air forces the respective governments have put in place incentives (financial or otherwise) to attempt to stem the exodus.

And this issue is not confined just to the Casa aircraft: it is one replicated within all units of the Air Corps.

For example, as a result of the loss of staff from the air-traffic control unit, a 24-hour service cannot be provided currently. This means, in effect, that even if an Air Corps Casa crew had been available on the night of the tragedy, it could not have got off the ground because currently there is no air-traffic control service after 6pm each day.

Many in the Air Corps nurse a frustration at not being able to do, under all circumstances, a job for which they were trained.

I feel that the current financial constraints imposed by the Government have, and will continue to have, an impact on the capability of the Air Corps to provide services so vital to our country.

This situation will not improve until a creative, multifaceted solution has been put into place to stem the losses. Training more cadets, while necessary, will of itself not fix the problem.

David O’Riordan is a commercial pilot and instructor