An Irishman’s Diary on a comma mistake 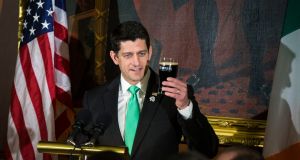 There was great excitement among grammar enthusiasts on both sides of the Atlantic this week, thanks to a ruling by a US Court of Appeal.

In case you missed the frenzy, it concerned the Oxford comma, a punctuation mark that some people (the right-thinking ones) believe should always be used in lists of three or more items, after the “and” or “or”.

Not everyone agrees.  And until now, those of us who do have had to rely on just trying to shame those scoundrels who would omit the comma.

The case began in a court in Maine, where drivers for a dairy company claimed that a state law disqualifying certain kinds of work from overtime did not apply to them.

The relevant section declared that overtime was not payable in respect of “the canning, processing, preserving, freezing, drying, marketing, storing, packing for shipment or distribution of [agricultural produce]”.

And although the clause framers probably considered “packing for shipment” and “distribution” to be separate items, the drivers argued that the absence of a comma implied otherwise.  Since their job involved distribution only, they were entitled to overtime.

A district court had ruled against this impeccable logic, but the appeals judge found in favour.  The drivers are now entitled to time-and-a-half for every hour over the 40, and this is predicted to cost the company “millions”.

Of course, careless punctuation can cost more than even money, sometimes. Remember poor Roger Casement, who was said to have been “hanged on a comma”, albeit not of the Oxford kind.

In his case, the text argued over was an ancient Treason Act, from 1351, which spoke of persons “adherent to the king’s enemies in his realm, aiding and giving them comfort in the realm or elsewhere”.

According to the prosecution, that “or elsewhere” embraced both parts of the sentence, making Casement’s adherence with enemies in Germany treasonous.  The defence countered that for this interpretation to apply would have required a comma before the “or”.

Which comma the prosecution duly claimed to find in the original document, although there was further dispute about whether this was indeed a comma, or just a storage mark. The defence also called 14th-century history as a witness, via the dual loyalties of Anglo-French barons who had reason to demand that the law specify treason as adherence to enemies “in the king’s realm” only.  None of which saved Casement.

Anyway, getting back to US courts, I am now hopeful that some judge there may yet rule against another grammatical abomination for which that country appears responsible, but which has become increasingly common here too.

I refer to a tendency to drop the “s” after the possessive apostrophe in singular words ending in “s”.  Thus, instead of “Guinness’s Brewery”, we see “Guinness’ Brewery”.  Or, instead of “St James’s Gate”, we get “St James’ Gate”.

The result, to my eyes, is as deficient as that sickly, headless pint the House of Representatives speaker Paul Ryan posed with on Thursday.  Both spectacles make me almost physically ill.

Massachusetts is the ultimate test, so the judge was rightly praised by grammarians.  One commentator lauded him “for bravely opening that even a four-syllable proper noun ending in a double consonant before the final ‘s’ is entitled to an additional ‘s’, regardless of the awkwardness of the resulting pronunciation”.   To which I say: hear, hear, and (after an Oxford comma) hear again.