Notion of ‘joint authority’ in North is all smoke and mirrors

This codology is powerful enough delusion to undermine support for Stormont 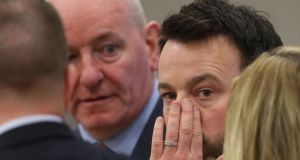 Northern nationalism has an alternative to Brexit – special status for the North within the EU.

Nobody has a clue what this means but at least Brussels has been asked if it will consider the possibility (it has said no).

Northern nationalism also has an alternative to direct rule from London. Should Stormont collapse, there must instead be ‘joint authority’ .

Nobody knows what this means either and Dublin has not been asked, which seems like quite an oversight, considering how much store is being set by southern input.

Joint authority has often been mentioned during frustrating episodes of the peace process, but mainly on the republican fringes. It finally went mainstream – even respectable – in January this year when SDLP leader Colum Eastwood not only called for joint authority but said it was “the only acceptable position for the nationalist community if, post-election, an Executive cannot be formed”.

The Northern Ireland Office promptly replied that “any form of joint authority” would be “incompatible with the Good Friday Agreement”.

Nationalists did not care. Two weeks later, in early February, the Belfast Telegraph reported the results of a major pre-election survey.

It was the SDLP that cooked up the idea of EU special status, shortly after last June’s Brexit referendum. Sinn Féin initially objected, before making a U-turn when it realised nationalist voters were too angry to see sense.

Joint authority seems to be following a similar path, with Sinn Féin bounced into indulging the idea against its better judgment.

A trawl of every peace process document and statement over the past two decades appears to have taken place, looking for the term “joint”. Not since the last Cheech and Chong movie can there have been a search for joints quite so desperate and farcical.

All that could be found in the mountain of verbiage was a single 2006 statement from Tony Blair and Bertie Ahern, representing the British and Irish governments, where they referred to “implications for their joint stewardship of the process” if the St Andrews agreement talks of that year ended in failure.

They specified these implications as continuing to develop the other elements of the Good Friday Agreement, including cross-border and east-west bodies, in the absence of a Stormont Executive.

Sinn Féin is now portraying this as an official plan B for joint authority, within the terms of the peace process.

Perhaps the party should be commended for trying to stay within agreed limits but its historical interpretation is finding few takers, not just because it is obviously nonsense but because it clearly misses the point.

The only durable example of joint sovereignty is Pheasant Island, an unpopulated speck in a Pyrenean river – and that only works because France and Spain swap full sovereignty every six months, rather than share it.

The Irish Government has a formal consultative role in Northern Ireland, and has had since the 1985 Anglo-Irish Agreement. This could be enhanced within existing structures, or for that matter within new structures, whether or not Stormont is resurrected.

The potential of Sinn Féin to be part of an Irish government adds an intriguing dimension. But even with all of that, joint authority would remain a fantasy. Consider any issue touching taxation, representation or enforcement of the law and the whole notion falls apart.

Real leadership should mean saying so. It is laughable that Sinn Féin has humoured such codology instead of facing down a silly soundbite from the SDLP. Still, the consequences could be significant – the Belfast Telegraph poll shows joint authority is a powerful enough delusion to undermine support for Stormont at times of crisis, when support is most needed.

As this constitutional kite is being flown in the name of the Irish Government, Dublin’s silence on the issue is remarkable. I can find no statement on record, even when the subject made headlines in January amid a flurry of north-south ministerial meetings and comment from the UK side.

Ironically, Dublin may be keeping its counsel because it does not want to interfere in Northern Ireland affairs. Brexit and Dáil politics are further complications. But if joint authority keeps cropping up it is going to need an answer – which should, of course, be, ‘What on earth have you been smoking?’