Bishops must formally commit to implementing zero tolerance of offenders 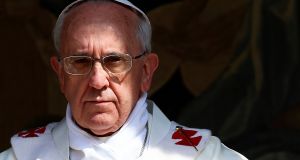 Now is the time for Pope Francis to spell out in detail, to the leaders before him and to the laity, exactly what process is being used when a bishop or other leader is accused of negligence or cover up. Photograph: Alessandro Bianchi/Reuters

Presidents of every Catholic bishops’ conference across the world – the church’s regional organisations – will be in Rome to attend a Vatican meeting on the protection of minors in the Catholic Church, from Thursday next.

It runs over three days and Pope Francis will be attending all sessions. This belated recognition that the sexual abuse of children by clergy is a global issue and needs to be addressed as such could be a crucial turning point in this long running saga.

It is an opportunity for the church by agreeing binding commitments to actions that they will deal properly with those in their ranks who perpetrate abuse or cover it up. It can show the world by concrete action that it is leaving the days of “protecting the church from scandal” in the past and making the safety of minors their priority.

True safeguarding in the church can only be achieved when those in leadership suffer severe consequences if they fail to protect the vulnerable. For this reason strong accountability measures must accompany any safeguarding policy

If this opportunity is missed and all that comes from the meeting are more reassuring words and promises, without any firm commitments to real action, it will be the last straw for many Catholics.

In my view this meeting needs to take a number of structural steps. The Pope should require the bishops present to formally commit to implementing “zero tolerance” in their countries. This means any cleric guilty of abusing a minor would be removed from the clerical state.

He has on a number of occasions promised that this is the way clerical sexual abuse of minors will be treated in future. At the moment it is still only a promise; it needs to become a reality and be secured by inclusion in church law.

In 2011 the Vatican required all episcopal conferences worldwide to send in their safeguarding policies. A high percentage had none but the standard of those that did varied dramatically.

Many were weak and it often depended on the individual bishop’s interpretation whether the right actions were taken. This unsatisfactory situation is still the position in many countries.

I would like to see a strong policy be presented to all the bishops which they must be required to implement. Fr Hans Zollner, one of the organisers of the meeting, said recently there can be no universal protection guidelines for the whole church because politics, law and social situations are diverse.

None of these have anything to do with internal church rules covering the behaviour of their clerics. They cannot be used as an excuse to deny a universal policy requiring a bishop to respond correctly to a case of abuse.

Canon law is universal, Catholic doctrine is universal, safeguarding children should be universal. Every child is entitled to the same level of protection no matter what country is their home. Their safety must not be a lottery dependent on their geographical location in the world.

True safeguarding in the church can only be achieved when those in leadership suffer severe consequences if they fail to protect the vulnerable. For this reason strong accountability measures must accompany any safeguarding policy.

When I spoke to Pope Francis in Dublin last August he said that accountability was happening. Now is the time for him to spell out in detail, to the leaders before him and to the laity, exactly what process is being used when a bishop or other leader is accused of negligence or cover up.

Who investigates? Who are the judges? What are the penalties?

There should also be a commitment that where there is a guilty finding it will be made public along with the sanction imposed. Transparency is needed; justice must be seen to be done. Trust has been lost; saying it is happening behind closed doors is not enough.

Pope Francis in his letter to the people of God, August 20th, 2018, said he was conscious work was being done in the church on ensuring the safety of children and vulnerable adults, in implementing zero tolerance and proper accountability of those who “perpetrate or cover up these crimes”.

However, he admitted:“We have delayed in applying these actions and sanctions that are so necessary.”

There is no excuse for any further delay. We must see a commitment to concrete actions come from this meeting. Anything less would be a betrayal of those who have waited so long to see this issue of clerical abuse of minors by clerics, tackled clearly and decisively.

My full submission to the Vatican meeting this week is at mariecollins.net/comment.html

Marie Collins is a Dublin abuse survivor who served on the Vatican’s Commission for the Protection of Minors from 2014 until March 2017 when she resigned, due to the frustration of its work by officials in the Roman curia