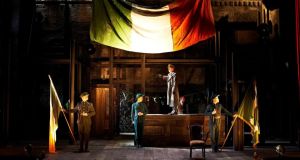 The Abbey’s 2010 production of Seán O’Casey’s The Plough and the Stars. Photograph: Ros Kavanagh

Responding to last week’s letter from members of the Irish theatre community, Saturday’s statement from Francis Ruane, chair of the board of the Abbey Theatre, unintentionally lifted the lid on another issue, one that has been causing serious concern among playwrights.

In her opinion piece in this newspaper, Ms Ruane stated: “On artistic programming, our role is to ensure the directors’ programming choices reflect our strategy.” What must now be asked is whether that strategy includes dismantling of the Abbey’s literary department. Because confusion now abounds as to whether the national theatre has a functioning literary department that engages with playwrights to discuss commissioning new works. Plays that deal with a diverse and challenging Ireland changing before our eyes, dramas that celebrate and interrogate our past and present, as well as non- literary works in new theatrical styles.

All that appears to exist is an email address to an “ideas” department where everyone is asked to submit scripts anonymously and from where they will be assessed by a committee; none of whom, it appears, has any significant experience in developing playwriting at a standard demanded by a national theatre.

The literary department has always played a leading role in the continuing development of Ireland’s theatrical canon by producing plays that spoke to the nation and questioned sacred cows, and work that experimented with form, widening the boundaries of Irish theatre.

But whatever type of drama the Abbey thought worthy of commissioning, the silence in relation to one in particular is deafening with its absence from our national stage.

As we enter the remaining years of our decade of centenaries, looking at this year’s and last year’s programmes, the Abbey seems strangely silent, through either ignorance or ambivalence, on the major historical milestones we are about to encounter. For it seems, as far the national theatre is concerned, the decade began and ended with 1916. Everything subsequent to that is either irrelevant or, more worrying, something the present directors aren’t aware of.

With the anniversary of Soloheadbeg on January 21st. Ireland officially enters the final years of remembrance. These years bring centenaries marking the War of Independence, ceasefire, treaty, Civil War and the establishment of the Border – a border that now finds itself centre stage as we hurtle towards Brexit while a stunned Europe holds its breath. And what is it our national theatre felt fit to present to the nation? A West End-bound musical about 9/11.

In the Rising and War of Independence the Abbey, as well as its staff, played important roles on and off the battlefield in creating national conversations. Questions now must be asked about whether the directors and are oblivious to these hugely important stages of our nation’s history. Or did they deem them unimportant, unworthy of commissioning playwrights to examine, celebrate or interrogate them because they do not reflect the strategy to which Ms Ruane alludes? Surely if any cultural institution in Ireland has an obligation and is best suited to re-examine our past, it’s the Abbey? Or when the time comes will they once again drag O’Casey out and leave it to him to do all the heavy lifting?

While the Abbey can’t be expected to mark every milestone, the apparent dismantling of the literary department suggests it has forgotten that part of its remit is to hold a mirror up to Irish society. Instead it appears caught up in admiring its own reflection, boasting about record box-office sales and successful co-productions. But it is vital that the Abbey commissions and produces new plays that reflect our flaws, contradictions. Dramas that poke around in the dark, shining lights into the crevices of society as well as entertaining audiences.

If significant centenaries are to be interrogated, playwrights need to be engaged urgently. Otherwise what was the decade of centenaries for? But it is not just historical Ireland that needs to be explored. We live in a country where some citizens live in tents while others are violently evicted by masked men because they’ve fallen behind on their mortgages. Yet all the while the stages of the Peacock and Abbey are mute. Where is the leadership, the anger, the imagination to commission playwrights to try to make sense of this strange new Ireland we find ourselves in?

Somewhere along the line, the Abbey’s vision has become blurred. Boasting that a West End musical is packing out fools few and impresses no one. And without casting any aspersions on the quality of the work, McDonald’s could boast too that it is hugely popular. Does that mean the product on offer is of any lasting quality?

The Abbey was never about bums on seats; that’s a concern for the Gaiety and Olympia, theatres who receive nothing in funding, relying solely on box office to keep their doors open. Thankfully the €6.8 million the Abbey receives annually ensures that’s a burden it doesn’t have to shoulder.

It’s worrying for a national theatre to measure success on tickets sales at the expense of commissioning and producing new work. Whatever the strategy, the literary department must be reinstated to engage with playwrights and foster a new generation of storytellers and theatre makers, while re-establishing relationships with those who have kept the Abbey’s flame alight and who will continue to do so long after the present directors have left the stage and gone the way of those before.

The Abbey must continue commissioning plays about about who we once were, who we are today and who we are going to be tomorrow.

Jimmy Murphy is a playwright

1 Coronavirus: Varadkar returns to practising medicine to help during crisis
2 Coronavirus: Number of Irish cases nears 5,000 as 21 further deaths confirmed
3 Restarting Ireland: When and how will we ‘get back to normal’?
4 Donald Trump’s clown car administration has put the fear in all of us
5 Coronavirus: Co Tyrone couple buried together after dying 20 hours apart
Real news has value SUBSCRIBE