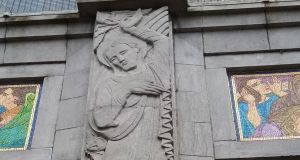 A piece by Gabriel Hayes at the entrance to the Church of the Ascension in Gurranabraher in Cork. Hayes was one of Ireland’s most prolific female sculptors of the 20th century.

Sculpture is a hot topic right now. It is an ideal time to look at the life and work of one of Ireland’s most prolific female sculptors of the 20th century. With numerous sculptures to her name, Gabriel Hayes certainly left her mark on the Irish art landscape.

You will be familiar with her work if you have ever wandered down Dublin’s Kildare Street and looked up to see her carvings on the modern grey straight-lined building that currently houses the Department of Business, Enterprise and Innovation.

It was opened in October 1942 as the offices of the Department of Industry and Commerce and holds the distinction of being the first purpose-built government office to be erected after the establishment of the State. Hayes began to work on the carved panels in late 1941.

The idea was that the major industries that were present in Ireland at the time would be showcased in the various limestone panels. These included milling, pottery, iron, shoemaking, tobacco processing and cement, as well as shipbuilding and aviation. The hydroelectric power station on the Shannon also features on the relief. The fact that she was selected for such a prestigious project was a real vote of confidence in her sculpting abilities.

Gabriel Hayes was born in 1909 and educated at the Dominican Convent on Eccles Street in Dublin. At the time, being an artist was not seen as a viable career choice for a young woman. At school, she was told, “drawing is alright . . . but remember, you must earn your living –you must be something useful”.

After school, she studied French in Montpellier in southeastern France for a number of years. While there, she took drawing lessons at a local art school and visited art galleries around the country to boost her knowledge and appreciation of art.

When she returned to Ireland, Hayes enrolled in the Dublin Metropolitan School of Art.

There, she was taught by Seán Keating and also received instruction from Oliver Sheppard. Sheppard is probably best remembered today for his bronze statue Death of Cúchulainn which stands prominently in the window of the GPO on O’Connell Street.

In the 1930s and 1940s, Hayes was a regular exhibitor at the Royal Hibernian Academy’s annual exhibition. She won the Taylor Art Prize awarded by the RDS in 1934 and in the same year, a children’s book that she illustrated was published. Again in 1934, she was commissioned to sculpt Stations of the Cross for Our Lady’s Hospice in Harold’s Cross.

Another prominent sculpture by Hayes is on display on the side of the old College of Catering on Dublin’s Cathal Brugha Street. Entitled “The Three Graces”, it depicts three women carrying out domestic tasks that were taught in the college when it opened as St Mary’s College of Domestic Science in 1941.

One figure is shown holding a cookery book, while the two others are shown cleaning and sewing. Carved from Ballinasloe limestone, the sculpture is enormous with the central figure measuring 10 foot. The entire sculpture weighs close to 17 tons.

Examples of Hayes’s work can be seen all over Ireland, with several of her sculptures on display in churches in Cork where she lived from 1936 to 1942. Her husband, Seán Ó Ríordáin, was professor of archaeology at University College Cork before taking up the chair of archaeology at University College Dublin. She created a life-size bronze statue of the Sacred Heart for a new church in Glanworth, near Fermoy in 1944. She also worked on the carving at the entrance to the Church of the Ascension in Gurranabraher on the city’s northside.

Many more religious commissions followed. In 1958, she was selected to create the 14 stations of the cross in the new Galway Cathedral. The project was completed in 1976, almost 18 years after it began. Today, the 28 life-size white-coloured statues carved from Portland stone stand out in stark contrast to the dark rock-faced limestone walls of the cathedral.

In an interview from 1954, Hayes declared “I’d like to spend my life at wood-carving.” While she did indeed carve statues from wood, she is probably best remembered for her stone and bronze sculptures. However, she also painted and designed commemorative medals and trophies for various events, including An Tóstal, the Bord Fáilte tourist festival.

She even designed the halfpenny, one penny, and two penny coins when Ireland went decimal in 1971. She drew inspiration from the illuminations of medieval artists. The halfpenny came from a manuscript in Cologne Cathedral, the penny from the Book of Kells, and the two pence from a Bible in the National Library in Paris.

She died in Dublin in 1978. According to Prof Paula Murphy, “Hayes was not driven by agenda, political or religious, but rather by the desire to make art.”

1 Irish in Canary Islands: Life has changed dramatically
2 Teenage boy dies at Powerscourt Waterfall in Co Wicklow
3 ‘I wandered around Dublin wondering: Is this what they call a capital city?’
4 Fresh investigation into the murder of Michaela McAreavey in Mauritius
5 Gardaí surrender 13 people to Polish police
Real news has value SUBSCRIBE