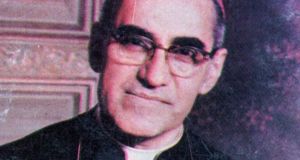 Widely – and rightly – regarded as a martyred champion of the rights of the poor and oppressed he was a fearless and outspoken critic of brutal, corrupt regimes as well as the powerful vested interests that sustain them.

Yet he was not by nature a revolutionary and would have been seen as a social conservative for much of his clerical life.

By Salvadorian standards of the time his background was not particularly poor although his family had neither electricity nor running water in their home and the eight children slept on the floor. His parents couldn’t afford to send him to school beyond the age of 12 and he became an apprentice carpenter.

He entered a seminary at 14 and was ordained in 1942. His spirituality was strongly influenced by Opus Dei, the conservative Catholic Church movement, and he received weekly spiritual direction from an Opus Dei priest.

Appointed secretary of the bishops’ conference of El Salvador in 1966, Archbishop Romero also became director of the Catholic newspaper Orientación, of which he was a fairly conservative editor.

One of his biographers argued that Romero agreed with the spiritual but not the materialist vision of liberation theology. Statements from him, such as “the most profound social revolution is the serious, supernatural, interior reform of a Christian” and that “the liberation of Christ and His Church is not reduced to the dimension of a purely temporal project”, seem to support this contention.

However, the situation in El Salvador was deteriorating rapidly. The military junta was killing those speaking out for justice, among them teachers, priests and nuns.

The murder of Jesuit priest Fr Rutilio Grande, a personal friend of the archbishop’s, on March 12th, 1977, had a profound impact on Romero. “When I looked at Rutilio lying there dead, I thought: ‘If they have killed him for doing what he did, then I too have to walk the same path’,” he said afterwards.

His call on the government to investigate the murder was ignored. In response he became much more of an activist than hitherto, speaking out vehemently against poverty, social wrongs, torture and murder.

He raised global awareness of the killings and disappearances in his country; for example, on a Vatican visit in 1979 he presented Pope John Paul II with seven detailed reports of murder, torture and kidnappings in El Salvador.

On March 24th, 1980, he was shot dead by a paid assassin while saying Mass in El Salvador’s capital, San Salvador. He had just spoken the prophetic words: “Those who surrender to the service of the poor through love of Christ will live like the grain of wheat that dies . . . The harvest comes because of the grain that dies.”

At his funeral there was a further atrocity when gunmen fired on the crowds attending. Then bishop of Galway Eamonn Casey, who was present, showed great courage ministering to the dying in the chaos that followed.

It is generally believed the murder was perpetrated on the orders of Major Roberto D’Aubuisson, a member of Salvadorian military intelligence. A Guardian article in 2000 named Oscar Linares, a police detective, as the killer, but to date no one has been convicted.

In 2010, the United Nation General Assembly proclaimed March 24th as International Day for the Right to the Truth Concerning Gross Human Rights Violations and for the Dignity of Victims. This was in recognition of Archbishop Romero’s role as a defender of human rights.

Archbishop Romero’s tomb in San Salvador’s cathedral has become a place of pilgrimage for many including President Michael D Higgins, who visited there on a state visit to El Salvador in 2013.

Pope John Paul II opened the cause for his canonisation in 1997. Pope Francis declared him a martyr in February 2015 and he was beatified in May 2015. But to many in El Salvador he has long been “San Romero”.

Brian Maye is a journalist and historian

1 Pubs to stay closed until September at least as restrictions tightened significantly
2 Boy’s treatment by school over alleged thefts was ‘unbelievable’, judge says
3 In Oz, Marianne would have told Connell: ‘Get stuffed, you gutless wonder’
4 Irish in Canary Islands: Life has changed dramatically
5 ‘This was like a nuclear bomb’: More than 2,700 injured in Beirut explosion
Real news has value SUBSCRIBE