Fintan O’Toole: United Ireland will not be based on ‘50 per cent plus one’

Brexit has made Irish unity more likely, but we need to reunify people first 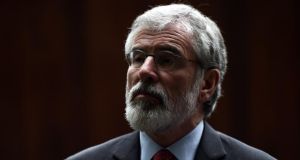 Among the many madnesses of Brexit is the licence it gives for loose talk about a united Ireland. As, for example, in a recent letter to The Irish Times from Sinn Féin president Gerry Adams: “the Good Friday Agreement… allows for Irish reunification in the context of a democratic vote: 50 per cent +1. I believe we can secure a greater margin, but ultimately that will be for the electorate. That’s what democracy is about.” There’s a remarkable blitheness to this, but the Brexiteers have given some apparent substance to such insouciance. The simplest way to avoid a hard Border, after all, is to have no Border at all. And the European Union has quite explicitly – and quite remarkably – stated that Northern Ireland can automatically rejoin the EU at any time after Brexit takes effect if it agrees to a united Ireland.

But we need to slow down here. Yes, Brexit and the upsurge of English nationalism that drives it have created a deep existential crisis for the United Kingdom that will unfold over the next 20 years. And over that timeframe Irish unity is now much more likely than it was before. Northern Ireland voted against Brexit and will be very deeply and adversely affected by it. The crisis of authority that is already so evident in London is likely to become even more acute: any conceivable deal with the EU will reignite the uncivil wars in English politics. Scotland’s resentment will deepen if an economic crisis results from a revolutionary change it emphatically rejected. Anarchy in the UK indeed. Any sensible unionist would be looking across the Irish Sea and asking – what the hell is it we are supposed to be united to?

I will be 60 next year, and before the Brexit vote I would not have put any money on my chances of seeing a united Ireland in my lifetime. But after that vote, I’d be glad to take a flutter. In some form, it now seems more likely than not, thanks in part to the Democratic Unionist Party. But it is an odd kind of likelihood, one that is simultaneously of great significance and scarcely worth talking about yet.

In Adams’s formula, it is all so simple. The Belfast Agreement allows for a Border poll; the poll is called and the nationalists beat the unionists by one vote. Voila!

The first problem with this is that Adams is actually wrong about the formula. It is not 50 per cent + 1 = a united Ireland. It is in fact 2x (50 per cent + 1) = a united Ireland. He likes to forget that there are two parties to this potential marriage. The citizens of the 26 counties have as much of a say in the matter as those of the six counties. The Irish Constitution, as amended specifically in the context of the Belfast Agreement in 1998, is explicit on the subject: “a united Ireland shall be brought about only by peaceful means with the consent of a majority of the people, democratically expressed, in both jurisdictions in the island”.

The second problem arises directly from this need for a referendum south of the Border. It has always been a mistake to assume that the consent of the Republic’s population to the creation of a new state can be taken for granted. Enthusiasm for Irish unity tends to increase the further into the future its achievement is postulated. (Make us whole, O Lord, but not yet.) That enthusiasm, moreover, is not unconditional. To put it bluntly (as no one ever does) southerners have no interest in inheriting a political wreck, or becoming direct participants in a gory sequel, Troubles III: the Orange Strikes Back. They will not vote for a form of unity that merely creates an angry and alienated Protestant minority within a bitterly contested new state.

And this in turn brings us to the third problem. In the context of Ireland’s future, 50 per cent + 1 is not, as Adams claims, “what democracy is about”. That kind of crude, tribal majoritarianism is precisely what the Belfast Agreement is meant to finish off. Again, the new article 3 of the Constitution is a good guide: “It is the firm will of the Irish nation, in harmony and friendship, to unite all the people who share the territory of the island of Ireland, in all the diversity of their identities and traditions. . .” Harmony, friendship, diversity, multiplicity, a unity not of territory but of people – not: “We beat you by one vote so suck it up and welcome to our nation.” Irish democracy has to be “about” the creation of a common polity in which minorities of different kinds can feel fully at home. We’re not remotely there yet – on either side of the Border.

Pushing for a Border poll in which a majority of one vote would solve all our historic problems is as pointless as it is delusional. The ultimate cause of Irish unity is being very well served as things stand – by its sworn enemies. Its friends can serve it best by working to create a Republic of equals that might be worth joining.