Theresa May and the great British brain robbery 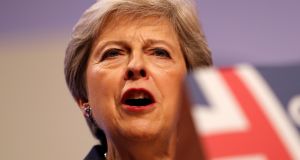 Theresa May delivers her keynote address on the final day of the Conservative Party conference, on Wednesday. Photograph: Darren Staples/Reuters

The national mood in the UK improved significantly this week after a fraught month that had caused a quite pervasive sense of dread here of late. After a damning rebuke from the European Union for her Chequers plan and recent revelations of Russia’s aggressive attempts to undermine their defence system, Britons were sorely in need of a pick-me-up.

And it came at the annual Conservative Party conference in Birmingham on Wednesday when the prime minister gave a barnstorming performance that has given the British public the reason to be optimistic they so needed. “Let’s build a better Britain,” May said with a macho emphasis that elicited rapturous applause from her party and was later widely commended in the media.

A “masterclass”, the Daily Telegraph said. Irish readers must understand that the system by which the prime minister is judged in the UK uses measurement standards that differ significantly to international ones. Translated into an Irish context, the phrase “masterclass” could be said to be equivalent to “did not make an absolute hames of”.

What making an absolute hames of something looks like will be easy for readers to recall. We only need to cast our minds back to last year’s humiliation when comedian Simon Bodkin outsmarted security and burst on stage mid-speech, handing May a P45. The sense of failure was compounded when lettering on the backdrop behind her fell to the floor, as if even it wished to distance itself from her. The whole debacle was underlined by May’s bout of coughing which in other circumstances would probably have gone unnoticed but, combined with the other obstacles, only served to underline her frailty.

This year’s speech was characterised by May’s determination to embrace the flaws the media have made so much of this year. She answered her critics who of late have mocked her for dancing awkwardly on an official visit to Africa by... doing some more dancing. This won’t make sense to Irish readers but demonstrates that a willingness to laugh at yourself is a personal quality that carries a fair weight in UK society, when compared with other parts of the world.

It’s a national trait that makes for a vibrant and robust entertainment industry but can be used by politicians to transcend otherwise disqualifying attributes. Like MP Jacob Rees-Mogg, who can somehow make people forget that he presides over a fortune of £100 million because he has learned how to accurately diagnose the resentment people have towards him.

May was also given kudos for simply stating an alternative version of a consternation-causing comment made by her main leadership challenger earlier this year. Boris Johnson had some time ago given the UK’s chief executive’s heart failure when he announced his Brexit business strategy (“F*** business” was his less-than-elegant phrasing). In her speech May demonstrated her credentials as safe choice of leader by offering the lacklustre “back” as an alternative four-letter word ending in K describing what she would do for UK business.

Perhaps it is mean-spirited of me to seek to undermine Britain’s good mood when there has been so little of it of late. People cannot be expected to wear a sombre expression 24/7. There must be some light at the end of the tunnel. But one cannot shake the sense that the fantasy underpinning it – that the standard of political leadership displayed by May is adequate – has a shelf life. There is an impending demand for recognition by reality on its way sooner rather than later.

It is when May is removed from her comfort zone that we see the crumbling of the facade begin. We caught a glimpse of the powerful grip the delusion of power has over her in Salzburg two weeks ago. Having just had her Chequers plan rebuked, May finished her statement at the press conference by calling out “Laauuuurraaaahh” to BBC reporter Laura Kuennsberg with the same desperation as Stanley bellowing out “Stellaaa” in a Streetcar Named Desire.

And like Stanley, we do seek to surround ourselves with people who will reinforce the myths we hold about ourselves when reality threatens to break through. The contrast in May’s demeanour was obvious when, 24 hours later at home and in the comfort of Downing Street, the illusion of power was restored and she was able to re-indulge in the fantasy by giving a Walt Disney-type speech about respect that played extremely well in the UK.

It is a curious scenario that has been allowed to persist. Why does the UK public not require answers from May to questions such as: “What alternative do you offer now that your Chequers plan has been rejected?” or “What will you do about the Border in Northern Ireland in the event of no deal?” or “How can you declare an end to austerity when the economic forecasts for Brexit are so bad?” For such a formidable people, it makes little sense.

Perhaps the reason May lives on in spite of her robotic media strategy (how many times do we have to hear her say she wants to be “perfectly clear about this”?) is not because of the leadership qualities she possesses; it may be because there is nobody around her willing to say the thing that would break the spell: “What if the people got it wrong?”

In this sense, Theresa May’s enemies could be said to be her greatest asset. They might snipe at her from the sidelines but the one thing Johnson, Rees-Mogg, Michael Gove and even Labour Leader Jeremy Corbyn won’t ever do is ask the prime minister to confront reality. They will allow her to brag about her future plans in the face of dire economic forecasts post-Brexit, the falling value of the pound and threats to peace in Northern Ireland because none of them would survive the loss of political capital that being honest would bring.

And so the political and media class have conspired to create a heroic type of narrative to represent Britain’s fortunes. They cast themselves as the plucky underdogs taking on the evil EU against all odds. It’s seductive as all hell. The great British brain robbery is well under way.