No Child 2020: The Budget saw important investments for vulnerable children 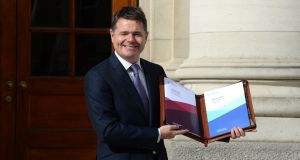 No Child 2020 is an Irish Times initiative to provide a sustained focus on child welfare and children’s issues in 2019. Inspired by the Democratic Programme issued by the first Dáil a century ago, it explores the problems facing children in Ireland today and offers solutions that would make this a better country to be a child in. The project concludes today. You can read the full series here

When you live in poverty, it’s the little things that matter. I visited a direct provision centre and met a teenager a number of years ago. I asked her what the worst thing about living in direct provision was, and she talked about her hair. At that time, her parents only got €9.60 each week to cover everyday expenses for each child, and she just didn’t have enough money for shampoo. She talked about washing her hair with cheap generic soap from the communal bathrooms. It made her hair frizzy and lank, and she was often ashamed going to school. The payment is now €29.80 per child.

I met a young mother soon after. Her husband was in a low-paid job and with four children, she struggled to keep her head above water. But she was excited because she had earned €25 for one night’s cover in the local care home. She didn’t spend the money on herself. Instead she bought a toilet brush and a mat for her bathroom because she was ashamed that she didn’t have either when people came to visit.

People living in poverty will often avoid telling you the truth about their lives. But if you look hard enough you’ll see glimpses. St Vincent de Paul reported that in the weeks leading up to Christmas last year, it received 132 calls in Cork on just one day, with 64 people looking for food. The everyday essentials just aren’t affordable for many families because they don’t have enough money.

The long-term impact of child poverty is well known. Children never reach their full potential. Lower educational attainment and poor employment choices lock each generation into a poverty cycle. But poverty isn’t inevitable, and we should never accept it.

Tony Blair in 1999 famously committed to ending child poverty in the UK by 2020. This was back when the Labour Party was euphoric from its election victory and long before the illegal invasion of Iraq. And the truth is that Blair’s government did succeed in lifting 1 million children out of poverty by 2010. Blair enacted a Child Poverty Act, invested in school meals and set up an early years programme called Sure Start.

Fast forward to 2019, and the Conservatives great achievement, apart from driving us into years of a Brexit-abyss, is the complete reversal of this trend. The Child Poverty Act and the UK Child Poverty Target were scrapped by Ian Duncan Smith. And years of austerity have meant that visiting the local food bank to survive is normal for hard-pressed families.

There are more than 4 million children living in poverty in the UK. And think tanks predict that under Boris Johnson’s watch, poverty figures will reach a 60-year high.

It’s a real warning. Politics matter. Who you vote for matters and what they do in government matters.

The truth is that if we are serious about turning the dial, we need political leaders who are brave enough to commit to ending child poverty

This is why the Children’s Rights Alliance and its members ran a nine-month campaign alongside The Irish Times’s No Child 2020 initiative. Our focus was on building the case to invest in public services that would help families living on the breadline.

We campaigned for hot school meals for every child, free school books, better access to medical cards, a culture card to give families at least one visit to an arts/culture facility, and a housing policy that limits the use of inappropriate emergency accommodation. We also called for increases in targeted welfare payments and better investment in the National Childcare Scheme for low-income families.

We heard from incredible families and young people who helped expose the effects of poverty on their lives. Our campaign focused on politicians standing for election and across the political spectrum. And we found champions in our political leaders, in government and in the opposition.

Even though a potential hard Brexit cast a shadow over Budget 2020, we still saw investments for vulnerable children.

The Government resisted tax cuts and instead allocated €4 million towards hot school meals for an additional 35,000 children. Another €160,000 was made available for a meals programme in childcare settings. And in a significant breakthrough, €1 million was provided to launch a pilot project for free schoolbooks in 50 primary schools.

Will these changes help to reduce our child poverty statistics? We’ll have to wait nearly two years to find out. The Irish Government has a target to lift 100,000 children out of consistent poverty by 2020. Figures published by the CSO in 2018 revealed that about 25,000 were lifted out of consistent poverty -– the biggest change since the recession. The 2019 CSO statistics reveal a further slight decline.

Budget measures can help reduce child poverty. But the truth is that if we are serious about turning the dial, we need political leaders who are brave enough to commit to ending child poverty.

We need a national action plan on child poverty that provides a roadmap to make healthcare free for all children, makes hot school meals part of every child’s day and breaks down the barriers in education.

We also need to benchmark welfare payments to the Minimum Essential Standard of Living Rates and raise the minimum wage to support low-income families trying to stay afloat under a sea of rising living costs. We need a large-scale public housing programme and to make childcare truly affordable for lone parents wishing to get back into training. We also need to launch our own early years’ programme in preschools and other settings for disadvantaged children to give every child a decent start.

I’m proud of what we have achieved as a country for children, but the time has come to end child poverty once and for all.

Tanya Ward is chief executive of the Children’s Rights Alliance, The Irish Times’s partner organisation in No Child 2020