Five people have been confirmed dead at hotel in Abruzzo region, 15 still missing

Eyewitness footage captures the moment that survivors are pulled from a hotel in central Italy, they had been trapped by snow and debris caused by an avalanche for two days. Video: Reuters 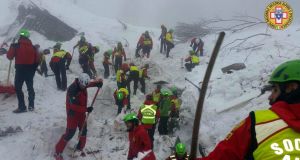 Five people have been confirmed dead at the hotel demolished by an avalanche in central Italy this week, and nine survivors have been pulled from the rubble, the national fire service said on Saturday.

There were about 30 people in the Hotel Rigopiano when a wall of snow smashed into it on Wednesday, and around 15 are still unaccounted for.

The body of one man was recovered from the shattered ruins of the hotel on Saturday morning, after those of two women were found overnight, raising the known death toll to five, a fire service spokesman said.

Four survivors - two men and two women - were recovered overnight after hours of painstaking digging by firemen, who moved cautiously for fear the buried air pockets might collapse.

Four children and a woman were saved on Friday, dug out from under tonnes of snow and debris in a remote valley in the Abruzzo region.

The avalanche came hours after a series of tremors struck the area, which was devastated by deadly quakes last year, and had been grappling with heavy snowfall.

The four-storey building was obliterated, and debris spread for hundreds of metres down the valley in the Gran Sasso park.

A further five people have now been found dead elsewhere in the Abruzzo after the double blow of snow and quakes, the national civil protection agency said on Saturday.

Italian media reported on Saturday that a number of other voices had been heard under the rubble of the hotel, but that it was proving hard to establish where exactly they were. There was no immediate confirmation of this from the emergency services.