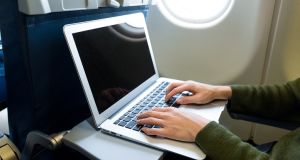 An airport trade association, said a laptop cabin ban could affect 3,684 flights weekly to the US from 59 European airports.

The US is considering expanding the ban on laptops in airline cabins on flights not only from Europe but from other regions despite objections.

US anti-terror officials are looking at other areas “not solely Europe,” David Lapan, a spokesman for the Department of Homeland Security, told reporters in Washington on Tuesday.

He declined to identify the other areas. Homeland Security secretary John Kelly has not made a final decision but an expansion is “likely,” Mr Lapan said.

The European Union urged the US not to ban laptops and other electronics in cabins of flights to America from Europe.

Extending the curbs, which currently apply only to some US-bound services from the Middle East and North Africa, would obstruct travel and might not be the best way of countering the threat, International Air Transport Association chief executive Alexandre de Juniac said. “Travelling with your laptop is part of everyday life,” Mr De Juniac said. “We are not sure that this ban is adapted to the threat. We don’t know what is the basis or intelligence that justifies this measure.”

European and US officials are to meet in Brussels on Wednesday to discuss the matter. The US in March banned electronic devices larger than mobile phones – including tablets, laptops and DVD players – in cabins on flights from 10 airports in the Middle East and North Africa.

The Washington Post on Monday reported that US president Donald Trump revealed to Russia’s foreign minister and ambassador closely held intelligence from a US partner about an Islamic State terrorist plot to use laptops as possible weapons aboard commercial aircraft.

The EU’s home-affairs chief cautioned against any hasty decision by officials in Washington. “We are very much concerned,” EU Home-Affairs Commissioner Dimitris Avramopoulos told reporters in Strasbourg. “We know that unilateral decisions should not be taken.”

Airports Council International, a trade association, said a ban could affect 3,684 flights weekly to the US from 59 European airports.

“We are concerned about the consequences that such a ban would have on demand for trans-Atlantic air travel,” Olivier Jankovec, director-general of ACI Europe, said in a statement. “The fact that one of the affected Gulf airlines has downsized its operations to the US is indeed worrying – and points to a wider and lasting economic impact.”

As many as 90 percent of passengers carry affected devices, the group estimates, meaning that implementing ad hoc screening checks and loading devices into aircraft cargo compartments would cause significant delays and cancellations.

US carriers have urged officials to consider alternatives to a ban, including using additional small scanners or explosives trace-detection systems on every item brought onto planes. Airlines worry that a ban could decrease lucrative business travel.