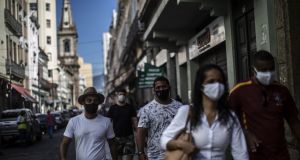 Brazil had the highest number of new cases with 54,771 infections, a record for a new daily total for any country, followed by the United States with 36,617 new cases. Above, people wearing protective masks walk past partially opened businesses in downtown Rio de Janeiro, Brazil, at the weekend. Photograph: Dado Galdieri/Bloomberg

The World Health Organisation has reported the largest single-day increase in the number of confirmed coronavirus infections, recording 183,020 new cases in the past 24 hours.

North and South America accounted for almost two-thirds of the new daily infections with more than 116,000 cases, according to the latest daily report from the Geneva-based organisation.

Brazil had the highest number of new cases with 54,771 infections, a record for a new daily total for any country, followed by the United States with 36,617 new cases.

There were a further 4,743 deaths reported in the 24-hour period, bringing the death toll from the coronavirus pandemic to 461,715.

The most deaths took place in North and South America where there 3,241 coronavirus-related fatalities, or 68 per cent of all deaths reported over the previous 24 hours.

There have been 8.7 million cases of the disease reported by the WHO.

It is followed by Brazil with just over one million cases and 48,954 deaths.

Germany’s reproduction rate for the disease, the key metric tracking the average number of infections caused by a carrier, climbed to almost three on Sunday.

Public health officials at Germany’s Robert Koch Institute said that the country’s coronavirus reproductive number climbed to 2.88 on Sunday due to local outbreaks in the state of North Rhine-Westphalia where there is a large cluster of infection among meat plant workers.

This reproductive rate means that for every 100 people who contract the virus, another 288 are likely to become infected with the disease too.

A figure of less than one means that the virus is being contained.