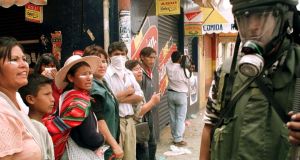 Street vendors protesting against a 20 per cent increase in the cost of water yell at riot police in 2000, in Cochabamba, Bolivia. Photograph: Gonzalo Espinoza/AFP/Getty Images

If the debacle of Irish Water suggests the State is “heading gradually” towards ungovernability, as Fintan O’Toole suggested in these pages recently, then events in Bolivia 14 years ago might stand as a warning to our politicians about the passions water can arouse.

Back in 2000, the South American country’s government so badly mismanaged a local dispute over water it escalated into the first water war of the 21st century and eventually helped lead to the overthrow of an entire political order.

Like metering in Ireland, the conflict had its roots when Bolivia became the ward of multilateral organisations, in its case the IMF and World Bank.

In return for the financial aid necessary to rescue a broken economy, these bodies demanded structural reforms, including the privatisation of Bolivia’s state enterprises. Mines, oil and gas fields, railways and electricity companies were all sold off, tens of thousands of workers fired, unemployment soared and poverty intensified.

However, despite the hardship, resistance among the population was patchwork. Until, that is, 1999, when the government gave a multinational consortium headed by US firm Bechtel a 40-year concession to manage the water of Cochabamba, Bolivia’s third-biggest city in return for a commitment to modernise the network.

Unlike in Ireland, the subsequent conflict did not arise because people were suddenly asked to pay for water. The city’s publicly run Semapa water agency already charged customers.

But deaf to the social realities of an impoverished country, the government and consortium blundered when it came to implementing changes in the management of what people saw as a vital human need. The consortium announced huge hikes in rates as state subsidies were eliminated, as demanded by the World Bank.

Meanwhile the government privatised and turned over to the consortium locally built and run water co-ops which served poor outlying rural districts that Semapa failed to reach.

By early 2000, Cochabamba had risen up in rebellion against what many saw as an effort to “lease the rain”. Barricades went up in the graceful colonial town centre while roadblocks out in the countryside blockaded the city and – thanks to Cochabamba’s location on Bolivia’s main east-west highway – cut the country in two.

The government declared a state of siege and tried to round up the union leaders and academics leading the protests. But with chaos spreading across the country, by April they were forced to back down after an army sniper was filmed shooting a student dead. Fearing for their safety, the consortium’s engineers abandoned Cochabamba while the government rescinded the contract. Protest leaders were appointed to Semapa.

With six dead, the uprising was a key moment in the mobilisation of ordinary Bolivians against the recipe of privatisation and austerity imposed on them by Washington.

Five years later, that mobilisation had swept the country’s traditional political class from power and replaced it with the indigenous dominated Movement Towards Socialism (MAS) of Evo Morales. “You cannot understand the rise to power of Morales without looking at the water war. It was an event that changed Bolivian history,” says Hernán Ávila Montaño, director of the Centre for Legal Studies and Social Research, a Bolivian think- tank.

However, if the conflict stands as a warning to politicians about the unsettling power of water to stir up political tempers, its long-term outcome is also laced with irony. Having come to power in part because of the ferment caused by the water war, the MAS has since enshrined the public ownership of water in law.

Eager though for more taxes from mineral exports, it has also allowed the booming mining sector to use – for free – huge quantities of water needed for its operations.

This has placed mines, many foreign-owned, in direct competition for water resources with local communities at a time when climate change is provoking drought conditions across large parts of the country.

Critics say 14 years on from the water war, the MAS has again allowed multinationals to grab control of much of the country’s water resources, only now via the mining sector. “We are going backwards,” argues the centre’s Ávila Montaño. “Under the MAS, multinationals can now come back to Bolivia and exploit water with much more security than during the aftermath of the water war.”