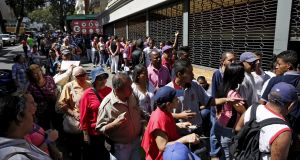 His government’s incompetence brutally exposed by the crash in the oil price, Venezuela’s president Nicolás Maduro has declared an “economic emergency” and demanded new powers to deal with the crisis.

In a decree he requested a 60-day constitutional “state of exception” that would give him the right to spend treasury funds as he sees fit, temporarily expropriate private property and further choke his citizens’ already limited access to foreign currency

The recently installed opposition-controlled national assembly says it must first approve the measures, which can be renewed for a further 60 days, before they can come into force.

A conciliatory Maduro went to the assembly on Friday to give his annual presidential address to the nation during which he sought support for the emergency powers.

Though he clashed with opposition members over the economy he did propose an independent truth commission to investigate the wave of political violence that left 43 people dead in 2014, which authorities have until now blamed on its opponents.

He also broached ending the country’s fuel subsidy which means motorists pay less for petrol than bottled water at the country’s service stations. Such a move would save the government billions but be politically explosive. The last serious attempt to rein in the subsidy in 1989 provoked an uprising in the capital Caracas during which hundreds of people died.

The opposition’s stance that it must approve the emergency powers risks opening up a new front in the struggle for political control between the embattled president and the United Democratic Table, or MUD, alliance which routed Maduro’s socialist party in December’s mid-term elections.

Replying to the president’s speech assembly head Henry Ramos Allup described his economic model as “erroneous”. But if the opposition rejects the president’s pleas and the economic emergency deepens it could open itself to blame for having failed to help tackle the growing crisis.

Emphasising the depths of the challenges the country faces, Venezuela’s central bank said inflation for the first nine months of last year totalled 141.5 per cent, the highest rate in the world, while the economy shrank 4.5 per cent during the same period.

Venezuela’s economy has been battered by the fall in the price of oil, practically the country’s only export. The price of a barrel of Venezuelan crude closed last week at just $24.38 aggravating a fiscal crisis caused by the price collapse. Such low levels leave the government with little cash to pay for imports of basic necessities such as food and medicines.

Despite having the world’s largest oil reserves the country is already suffering severe food shortages provoking long queues outside supermarkets.

Though the president vowed in his speech to continue servicing Venezuela’s huge debts despite dwindling funds, financial markets are increasingly pricing in the likelihood that a cash-strapped Caracas will default on these sometime during 2016. Despite Maduro’s predecessor Hugo Chávez antipathy towards capitalism, Venezuela has remained a reliable debtor during its 17-year long socialist “Bolivarian” revolution.

Maduro continues to blame the crisis on what he claims is an “economic war” being waged against his country by outsiders in league with elements of the country’s business community. But local and foreign economists have blamed the government’s profligate spending on populist policies paid for by oil exports.

These have now been exposed as unsustainable by rout in oil markets, a fact the government has sought to hide by printing money, which in turn has only worsened already rampant inflation.