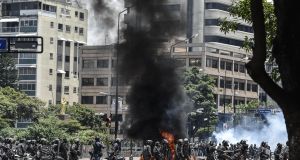 Venezuela is facing international pariah status after most South American governments said that Sunday’s controversial election of a new constitutional assembly marked a “rupture” with the country’s democratic system.

Backers of embattled president Nicolás Maduro took all the seats in the new body after the Venezuelan opposition boycotted the poll, claiming it was designed to seal the country’s transformation into a dictatorship.

On Monday, the US government imposed financial sanctions on Mr Maduro, accusing him of “undermining democracy”.

The sanctions freeze any of Mr Maduro’s assets under US jurisdiction, and prohibit US citizens from doing business with the beleaguered president.

Acording to Reuters, the US is also considering further sanctions against Venezuela’s oil industry, which could prove devastating for a country which is already in a state of economic free-fall.

Venezuela’s oil industry is the country’s only source of foreign currency, which it needs to pay for food and medicine imports.

In a televised address on Monday, a defiant Mr Maduro said the new body would be sworn in immediately and strip parliamentary immunity “from those from whom it should be taken”, in what appeared to be a threat against the existing opposition-controlled national assembly.

Mr Maduro also warned the new assembly would attack the “parasitic bourgeoisie” in order to solve the country’s deepening economic crisis and take over the country’s prosecution service, “so there can be justice”.

The assembly will have wide-ranging powers to rewrite the country’s constitution, which Mr Maduro’s own populist Chavista movement drafted in 1999 under the auspices of his deceased predecessor and mentor, Hugo Chávez.

The success of Sunday’s poll was disputed within Venezuela, with the Chavista-dominated electoral commission saying 8.1 million people took part, a turnout of 41 per cent, which is significantly below usual participation rates in major elections. But even this figure was disputed by the opposition, which claimed that turnout was just 12 per cent.

Even before Sunday’s results were announced, Brazil said Mr Maduro’s rejection of calls to cancel the election “confirms the rupture of the constitutional order” in the country.

In neighbouring Colombia, the foreign ministry said the installation “by force of an illegitimate constitutional assembly will lead Venezuela into a rupture of democratic coexistence”.

Argentina, Mexico, Peru and Chile all said they will not recognise the new body, which will have the authority to dissolve the current national assembly that the opposition seized control of in a crushing election victory in 2015. Mr Maduro and the legislature have been locked in a bitter political stand-off ever since.

If the regional Mercosur trade bloc decides Venezuela, which was suspended from the organisation last year, is in breach of its democratic commitments as a member, it would clear the path for the bloc to impose sanctions against the country’s imploding economy.

The EU also condemned Sunday’s election, saying in a statement it “reinforced the European Union’s preoccupation for the fate of democracy in Venezuela”.

Condemning “excessive and disproportionate use of force” by the Venezeulan security forces, the statement said a constitutional assembly “elected under doubtful and often violent circumstances cannot be part of the solution. It has increased division and will further delegitimise Venezuela’s democratically elected institutions”.

The US administration had earlier labelled the election a “sham”.

Mr Maduro said he did not give “a damn” what US president Donald Trump thought of the election. He received backing from Bolivia’s president Evo Morales, as well as the communist government in Cuba and the authoritarian regime of president Daniel Ortega in Nicaragua.

Opposition leaders have called for a new round of protests following the vote, raising the likelihood of more clashes between police and protesters.