Democratic nominee steps up defence against email inquiry: ‘There is no case here’ 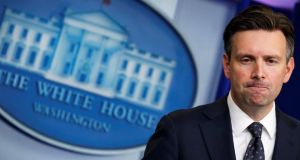 The White House has adopted a neutral stance in the barrage of criticism from Hillary Clinton and her fellow Democrats against FBI director James Comey over his disclosure of a revived inquiry into her emails.

President Barack Obama and first lady Michelle Obama have been Mrs Clinton’s most effective cheerleaders on the campaign trail but the president declined to step into the row between his former secretary of state and Mr Comey, whom Mr Obama appointed in 2013, over the new inquiry into her emails.

“I’ll neither defend nor criticise what director Comey has decided to communicate to the public about this investigation,” said Mr Obama’s spokesman Josh Earnest about the FBI’s decision to tell Congress that it was reviewing newly found emails that appeared to be “pertinent” to Mrs Clinton’s use of a private server as secretary of state.

The emails were discovered on a laptop used by Huma Abedin, the vice-chair of Mrs Clinton’s presidential campaign and her long-time aide, and her estranged husband, former US congressman Anthony Weiner, in a separate investigation into allegations that he sent sexually explicit messages to an underage girl.

Ms Abedin, who started working for Mrs Clinton as an intern when she was first lady and has been described as like a surrogate daughter to the Democrat, has not travelled on her campaign aircraft since Friday.

Mr Earnest told reporters Mr Obama believed the FBI director was a “man of principle and good character”, standing behind Mr Comey as Democrats fulminate over his decision to write to Republicans and Democrats in Congress updating them about the emails leading to the renewed Clinton email investigation.

Mr Obama is hitting the campaign trail four times this week, in the battleground states of Ohio, North Carolina and Florida to campaign for Mrs Clinton.

Mrs Clinton stepped up her defence after she and her campaign aides questioned Mr Comey’s decision in strong terms over the weekend.

“There is no case here,” she said defiantly at a campaign stop in Ohio to applause from her supporters.

Democrats have lined up to criticise the FBI director for making a high-profile intervention into the US election. The party’s leader in the US senate, Harry Reid, suggested he may have broken the Hatch Act, a federal law that prohibits FBI officials from using their official authority to influence an election.

At the White House, Mr Earnest said that he knew little about Mr Comey’s decision to inform Congress about the new emails and that he would have to explain his decision himself.

“I have made clear that the White House will be scrupulous about avoiding even the appearance of political interference in prosecutorial and investigative decisions,” he said.

Mr Comey sent his letter on Friday to update Congress on his previously sworn testimony that the FBI investigation was concluded, rocking the US presidential race less than two weeks before election day.