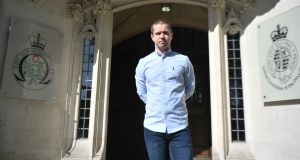 Sam Hallam outside the Supreme Court in London before he and Victor Nealon take their legal battle for ‘miscarriage of justice’ compensation to the UK’s highest court. Photograph: Victoria Jones/PA

Two men who spent years behind bars before their convictions were overturned are taking their legal battle for “miscarriage of justice” compensation to the UK’s highest court.

Sam Hallam, who was convicted of murder, and Victor Nealon, who was found guilty of attempted rape, previously suffered defeat at the High Court in 2015 and then at the Court of Appeal in 2016.

Their human rights challenges will now be under the spotlight at the Supreme Court in London on Tuesday May 8th.

Mr Nealon, who is in his fifties and originally from Dublin, was given a life sentence after his trial at Hereford Crown Court and served 17 years in jail — 10 more than the seven-year minimum term — after he persisted in asserting he was innocent.

Mr Hallam, from east London, served more than seven years after he was sentenced to life as a teenager following his conviction at the Old Bailey in 2005 of the murder of a trainee chef.

They were both set free after appeal judges ruled that fresh evidence made their convictions unsafe.

Mr Hallam’s conviction was quashed in 2012. Former postman Mr Nealon, who was convicted in 1997 of the attempted rape of a woman in Redditch, Worcestershire, won his appeal in December 2013.

But each had applications for compensation rejected by the UK’s justice secretary.

When their challenges against the justice secretary were originally aired at the High Court, they asked two judges to rule that UK law is incompatible with the European Convention on Human Rights (ECHR) because it wrongly restricts compensation in “miscarriage of justice” cases.

Lawyers argued on their behalf that the Criminal Justice Act 1988, which governs compensation payments, was amended in 2014 in a way that violated Article 6 (2) of the ECHR — the presumption of innocence — because it required a person seeking an award to prove they were innocent.

Their compensation claims under the 1988 Act were rejected on the basis that it was not the case — as required by the Act — that a “new or newly discovered fact shows beyond reasonable doubt that there has been a miscarriage of justice”.

Lord Justice Burnett, who later became the Lord Chief Justice, ruled when announcing the High Court’s decision that the law “does not require the applicant for compensation to prove his innocence”.

He said: “It is the link between the new fact and the applicant’s innocence of which the Secretary of State must be satisfied before he is required to pay compensation under the 1988 Act, not his innocence in a wider or general sense.”

The two men then took their fight to the Court of Appeal, but they failed to persuade the court to overturn the earlier decision of the High Court.

A panel of five Supreme Court justices, headed by the court’s president Lady Hale, are now being asked to rule in the latest round of the legal battle.

They will be ruling on the issue of whether the definition of a miscarriage of justice in the 1988 Act, “which has the effect of restricting awards of compensation to cases in which a new or newly discovered fact shows beyond reasonable doubt that the person did not commit the offence” is “incompatible with the presumption of innocence” in Article 6 (2).–PA