Latin America fell victim to political and economic malaise in 2019 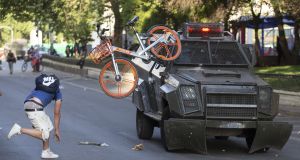 Hundreds of thousands of protesters took to the streets of Santiago, capital of Chile, this year, many fighting running battles with police. Photograph: Claudio Reyes/AFP via Getty Images

If one date defines the year in Latin America it is October 18th, when Chile erupted in rage. It was the day when a week of protests against a rise in bus fares escalated into something much graver.

Hundreds of thousands took to the streets of the capital Santiago, many fighting running battles with police. Barricades went up, dozens of metro stations were attacked, other buildings torched, shops looted. The unrest quickly spread to other cities.

Those October days in Chile shocked observers because the Andean country had been the region’s great success story of recent decades. That such fury erupted even there underlined the serious malaise now gripping Latin America.

Chile was just one of a string of Latin nations to experience often bloody social unrest this year. Many different causes are feeding the discontent, but it takes place against a background of stuttering economies. According to the International Monetary Fund, Latin America was the world’s slowest growing region this year.

This has left governments with little cash to ameliorate the impact of hard times for millions who at the start of the decade had dared to dream of joining the middle class when Chinese demand for Latin commodities was turbo-charging growth.

And the force of public anger at these new straitened circumstances is being multiplied by the continuous stream of evidence of the endemic corruption of the region’s political classes.

In Peru, which spent much of the year locked in political crisis, former president Alan García died by suicide in April as police prepared to arrest him on charges of accepting bribes from Brazilian construction-cum-corruption conglomerate Odebrecht.

Earlier in the year an Odebrecht affair in Colombia became a murder-mystery after three people caught up in investigations of the Brazilian company’s bribery scheme there died in mysterious circumstances, prompting that country’s first demonstrations of the year.

Caught off balance by the volatile public mood, the response by leaders to the year’s pressures has varied.

In Peru, President Martín Vizcarra has harnessed public disgust at its corruption to shut down congress and launch a wholesale reform of the country’s institutions.

The presidents of Chile, Ecuador and Colombia have with varying degrees of success sought to calm the unrest in their countries by calls for national dialogue and various promises of change.

However, in Venezuela the opposition’s attempt to topple the chavista regime of President Nicolás Maduro by having Juan Guaidó declare himself president in January has been meet by increased repression not conciliation. The United Nations now estimates that in the last two years regime-linked death squads have killed several thousand Venezuelans, while more than 4.6 million have quit the country, fleeing the economic and social collapse overseen by Maduro.

In November, the chavista strongman lost one of his few remaining regional allies when Bolivia’s long-time leftist president Evo Morales was forced into exile in Mexico. His attempt to secure an unconstitutional fourth consecutive term in office came apart after an attempt to rig the vote, secret computer server and all, gradually came to light amid three weeks of violent protests.

And while the right in Bolivia celebrates the fall of Morales, across the border in Argentina it suffered a chastening year. There the attempt to wean the country off populism definitively fell apart in 2019.

The orthodox programme of Mauricio Macri failed abjectly to resolve the economic shambles he inherited on assuming the presidency in 2015. Instead it ended up only making things worse. Voters passed their own judgment in October by turning back to the Peronist party, still controlled by those responsible for the mess in the first place.

It means populists of varying stripes now dominate Latin America’s Atlantic seaboard and in Argentina, Mexico and Brazil, its three largest economies. So far they have done little to prove they have the answers to the region’s problems.

In Mexico the leftist Andrés Manuel López Obrador saw his frenetic first year in power overshadowed by an increase in violence linked to the country’s never-ending drugs war just as the economy stalled.

In contrast, Brazil’s far-right president Jair Bolsonaro, sworn in on New Year’s Day, had more luck on the economic front. The region’s biggest economy is showing signs of emerging from its long slump. Yet that might only embolden the erratic administration of the former army captain that in other areas seems determined to wage war on the Enlightenment while threatening to implement an authoritarianism of its own.

Of most concern globally it is now permitting an open assault on the environment that shocked the world in August when images of the Amazon in flames went viral.

For Latin America, a decade that opened so optimistically is moving towards a dark close.