US withdrawal from Iran deal branded a ‘serious mistake’

Leaders of France, Germany and UK express ‘regret and concern’ over Trump’s decision

US president Donald Trump has said his country will "implement the highest level of economic sanction" against Iran as he pulls out of the Iran nuclear deal. Video: The White House 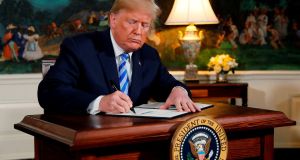 US President Donald Trump signs a proclamation declaring his intention to withdraw from the JCPOA Iran nuclear agreement at the White House on Tuesday. Photograph: Jonathan Ernst/Reuters

Speaking at the White House, Mr Trump announced that America would withdraw from the agreement, denouncing the nuclear deal struck by his predecessor Barack Obama and six other countries as “defective at its core”.

While allies had hoped that Mr Trump might embrace some form of incremental withdrawal, he instead announced that America would begin reinstating sanctions that were waived under the 2015 deal and impose new economic sanctions on Iran.

The US treasury department was on Tuesday night due to announce a “wind-down” period for companies affected by the current sanctions, ranging from 90 days to six months. But the impact of the US withdrawal was expected to be immediately felt on the global trading system as companies and oil markets absorb the news.

“The fact is this was a horrible one-sided deal that should have never ever been made. It didn’t bring calm, it didn’t bring peace, and it never will,” Mr Trump said as he announced the US withdrawal from the agreement, which aimed to restrict Iran’s nuclear activities in exchange for the easing of sanctions on the Iranian economy.

In a televised address following the announcement, Iran’s president Hassan Rouhani said he had directed his officials to continue to negotiate with Russia, China and the European signatories of the deal about remaining in the agreement.

France, Germany, and the UK regret the U.S. decision to leave the JCPOA. The nuclear non-proliferation regime is at stake.

We will work collectively on a broader framework, covering nuclear activity, the post-2025 period, ballistic activity, and stability in the Middle-East, notably Syria, Yemen, and Iraq.

But he warned that Iran would “start enriching uranium more than before” and within a few weeks if the negotiations do not yield concrete results.

The leaders of France, Germany and the United Kingdom issued a joint statement expressing their “regret and concern” over the decision.

“Together, we emphasise our continuing commitment to the JCPOA [Joint Comprehensive Plan of Action]. This agreement remains important for our shared security,” they said.

Noting that the JCPOA was unanimously endorsed by the United Nations Security Council, they said the resolution “remains the binding international legal framework for the resolution of the dispute about the Iranian nuclear programme”.

Speaking in Brussels, EU foreign policy chief Federica Mogherini said the EU was “determined to preserve” the agreement. “The nuclear deal is not a bilateral agreement,” she said. “And it’s not in the hands of any single country to terminate it unilaterally.”

In a show of solidarity, European officials met with Iran’s deputy foreign minister for political affairs in Brussels in the hours before the announcement from Washington.

In a rare public comment on a policy of his successor, former president Barack Obama issued a statement describing the decision as a “serious mistake”.

“The JPCOA is working – that is a view shared by European allies, independent experts and the current US secretary of defence. The JCPOA is in America’s interests – it has significantly rolled back Iran’s nuclear programme.”

Noting that it was a model for “what diplomacy can accomplish”, Mr Obama said that the agreement’s inspections and verification regime were “precisely what the United States should be working to put in place in North Korea”.

As Mr Trump announced the US withdrawal from the agreement, he revealed that secretary of state Mike Pompeo was on his way to North Korea ahead of a planned summit between Mr Trump and Kim Jong-un.

It is expected that Mr Pompeo may return with three American detainees who are being held in North Korea. Mr Trump’s legal counsel Rudy Giuliani said last Thursday on Fox News that the detainees would be released by the end of the day, but they have yet to be released.

1 One hundred Irish retailers for all your online Christmas shopping
2 Covid-19: Backlog forces HSE to skip calls to thousands of close contacts
3 Suzanne Lynch’s US Election Diary: Trump ‘walks out’ of TV interview at White House
4 School ordered to reopen after closing due to Covid-19 fears
5 ‘Groundbreaking’ direct provision replacement forecast to save millions
Real news has value SUBSCRIBE