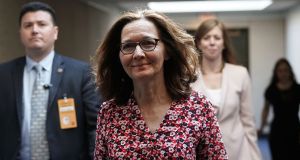 Gina Haspel, US president Donald Trump’s nominee to lead the CIA, faces a key Senate hearing on Wednesday as she continues to battle questions about her past involvement in CIA interrogation practices.

The 61-year-old CIA veteran, who is currently deputy director at the agency, will appear before the Senate intelligence committee in a hearing that is likely to focus on her knowledge and involvement in a controversial interrogation programme run by the CIA in Thailand in 2002.

While Ms Haspel’s confirmation must go to the Senate for a full vote, Wednesday’s hearing will give a strong indication of her chances of replacing Mike Pompeo as director of the agency.

Republicans control just 51 of the 100 seats in the Senate, and Republican senator Rand Paul has already indicated he will oppose Ms Haspel’s nomination. Similarly, veteran Republican John McCain, who is away from Washington undergoing cancer treatment, was himself a victim of torture during the Vietnam war, and has already raised questions about the CIA’s policy at that time.

Ms Haspel is highly respected within the intelligence community, and a group of intelligence officials, including former CIA director Leon Panetta and Barack Obama’s director of national intelligence James Clapper, were among the signatories of a letter to the committee endorsing her nomination.

But serious questions remain about her role in a so-called black site in Thailand where a prisoner was subjected to “enhanced interrogation techniques”, including waterboarding. The CIA also ordered the destruction of more than 90 tapes of video evidence of those techniques in use.

Her defenders argue she was following orders that were legal at the time. The US later outlawed such practices as illegal. But Mr Trump said during his campaign that he supported torture in certain circumstances.

If confirmed, she would be the first woman to lead the agency.

“My highly respected nominee for CIA Director, Gina Haspel, has come under fire because she was too tough on Terrorists,” the president wrote on Twitter. “Think of that, in these very dangerous times, we have the most qualified person, a woman, who Democrats want OUT because she is too tough on terror. Win Gina!”

Ms Haspel met with senior figures on the Senate intelligence committee on Tuesday in advance of the committee hearing.

Meanwhile, there were reports that Donald Trump’s support for Scott Pruitt, the embattled head of the Environmental Protection Agency (EPA), might be wearing thin.

Mr Pruitt, a former attorney general of Oklahoma and a climate change sceptic who was appointed by Mr Trump last year to run the agency, has been embroiled in a series of controversies involving his links with lobbyists, use of first-class travel, and his costly security practices. He is now the subject of 11 federal investigations, mostly by the EPA’s inspector general.

Mr Pruitt appeared before two congressional committees last month, where he was forced to defend his behaviour. Congressman Frank Pallone, the top Democrat on the House energy and commerce committee, said he was “unfit to hold public office and undeserving of the public’s trust”.

Senior Republicans also raised questions about his behaviour. Mr Pruitt said that “much of what has been targeted against me and my team has been half-truths, or at best stories that have been so twisted that they do not resemble reality”.

So far the president has continued to support Mr Pruitt, but several reports this week suggested he may be willing to fire him.