US wildfires: Thick smog ‘could linger for days or weeks’ 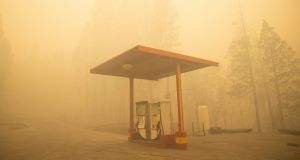 Dangerously dirty air caused by wildfires on the west coast of the United States is seeping into homes and businesses, into cars through air conditioning vents and preventing people already shut away by the coronavirus pandemic from enjoying a walk or trip to the park.

People in Oregon, Washington state and California have been struggling for a week or longer under some of the most unhealthy air on the planet. Scientists and forecasters say the acrid yellow-green smog may linger for days or weeks.

It is also a sign of things to come. With wildfires getting larger and more destructive because of climate change and more people living closer to areas that burn, smoke will likely shroud the sky more often in the future.

The hazy air closed businesses like Whole Foods and Powell’s Books in Portland and suspended rubbish collection in some communities. Pollution and fire evacuations cancelled online school and closed some college campuses in Oregon.

“It is so bad that you can likely smell (smoke) inside your house,” said Sarah Present, the health officer for Clackamas, Multnomah and Washington counties. “In some areas, the air quality is so hazardous it is off the charts of the EPA’s (Environmental Protection Agency) rating scale.”

The Oregon department of environmental quality’s Air Quality Index is considered hazardous between 301 and 500. Values above 500 — which multiple Oregon cities have reported during the past week — are beyond the index’s scale.

The air quality agency extended an alert to Thursday, and the air was so thick that Alaska Airlines stopped flights to Portland and Spokane, Washington, until Tuesday afternoon.

“I don’t think that we should be outside, but at the same time, we’ve been cooped up in the house already for months, so it’s kind of hard to dictate what’s good and what’s bad. I mean, we shouldn’t be outside period,” Portland resident Issa Ubidia-Luckett said.

Zoe Flanagan, who has lived in Portland for 12 years, braved the smog to walk her two dogs on Monday. In desperation, she and her husband turned on the heater a day earlier because it has a better filter than their air conditioner.

She said the air made her feel hungover, despite not drinking. She could not get enough water, and she had a headache. With health officials urging people to stay inside, the poor air also took away the simple pleasure of being outdoors during the coronavirus pandemic.

“Those backyard hangouts that we all got so used to as our one saving grace are now totally gone, and we just have to keep practising letting go of what normal is,” Ms Flanagan said.

Smoke can irritate the eyes and lungs and worsen some medical conditions. Health experts warned that young children, adults over 65, pregnant women and people with heart disease, asthma or other respiratory conditions are especially vulnerable.

“The lasting effects of breathing the small particulates in the wildfire smoke can be extremely dangerous,” Ms Present said. “It can lead to heart attacks, irregular heart rhythms and even death.”

The region has had a significant increase in hospital visits due to air quality, officials said.

Satellite images show that smoke from the wildfires has reached as far as Europe.

Data collected by the European Union’s Copernicus Atmosphere Monitoring Service found smoke from the fires had travelled almost 8,000km through the atmosphere to the UK and other parts of northern Europe.

The European Centre for Medium-Range Weather Forecasts, which operates some of the Copernicus satellite monitoring systems, said the fires have emitted an estimated 30.3 million tonnes of carbon.

“The scale and magnitude of these fires are at a level much higher than in any of the 18 years that our monitoring data covers, since 2003,” said Mark Parrington, a senior scientist and wildfire expert at Copernicus Atmosphere Monitoring Service.

Mr Parrington said the smoke thickness from the fires, known as aerosol optical depth (AOD), was immense, according to satellite measurements.

“We have seen that AOD levels have reached very high values of seven or above, which has been confirmed by independent ground-based measurement,” he said. “To put this into perspective, an AOD of one would already indicate a lot of aerosols in the atmosphere.” — AP