US identifies IS militant in videos of beheadings

FBI declined to give the person’s name or nationality 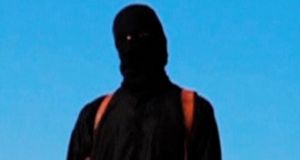 The masked Islamic State militant in the videos depicting the beheading of two Americans has been identified, FBI director James Comey said today, but he did not give the person’s name or nationality.

Mr Comey, speaking to a small group of reporters, declined to give further details about the suspect.

He said roughly one dozen Americans were known to be fighting with militants in Syria, and that many who fought there had already returned to the United States.