Healthcare part of US election dominated by Trump 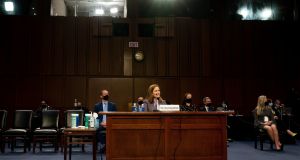 Judge Amy Coney Barrett: Republicans, who control 12 of the 22 seats on the committee, are expected to confirm her after which the process will move to the full Senate. Photograph: Anna Moneymaker/New York Times

The confirmation hearing for Donald Trump’s supreme court nominee Amy Coney Barrett concluded this week, paving the way for a vote in the Senate judiciary committee next Thursday.

The outcome of the hearing was never in doubt. Republicans, who control 12 of the 22 seats on the committee, are expected to confirm Barrett, after which the process will move to the full Senate. Senate majority leader Mitch McConnell said this week he has the votes – and there is no reason to doubt him. A wily political operator, he would not allow a vote go to the floor without knowing where his members’ intentions lie.

The US president looks set to get his wish, successfully nominating a third conservative justice to the supreme court, making a reshaping of the judiciary one of the few election promises he has succeeded in keeping.

But the political costs are not yet known.

Democrats’ handling of the hearings this week was deft and strategic. They knew they were fighting something of a futile battle. “I recognise, Mr Chairman, that this goose is pretty much cooked,” New Jersey senator Cory Booker said to Lindsey Graham, the Republican chair of the committee.

But they resisted the lure of engaging in an unsightly partisan battle with the 48-year-old judge.

Republicans still believe that the wrathful Brett Kavanaugh hearings in 2018 helped them retain their Senate majority in the midterm elections of that year. Anecdotally, they are correct. During my own reporting trips around the country at that time, the Kavanaugh hearings were raised again and again by conservative voters who believed he was mistreated.

Dianne Feinstein’s remark during Barrett’s confirmation hearings following her nomination to a lower court in 2017 that her Catholic “dogma lives loudly within you”, sparked a backlash at the time. Three years later as Barrett faced the committee once again, Republicans accused Democrats of imposing a religious test on public officials.

In fact, Democrats did not go down that route this time. Though they did question Barrett on her views on legal precedence and the 1973 supreme court abortion ruling Roe v Wade, much of their focus was on the Affordable Care Act (ACA). Oral arguments in a case related to the Act – also known as Obamacare – are due before the court on November 10th, exactly a week after the presidential election.

The Trump administration has joined 18 Republican-controlled states in mounting a legal challenge to the Act. In 2017 Republicans eliminated the individual mandate – the principle that everyone must have health coverage, which is essential for the system to work – and are now arguing that the entire law should be overturned.

While Republicans have repeatedly promised to “repeal and replace” Obamacare, that effort foundered in 2017 when the late John McCain broke with his party and gave a thumbs-down in a vote on the Senate floor. Since then, Republicans have struggled to come up with any meaningful healthcare strategy.

Obamacare has had an interesting journey – though it was initially unpopular and embroiled in technical difficulties, gradually most Americans have come to embrace it, despite it leading to higher insurance costs for some people.

Nonetheless, support for the Act or otherwise falls along party lines – a survey this year found that 72 per cent of likely Democrat voters approved of it, while the same percentage of Republicans disapproved. Of course, the experience of Obamacare varies widely between states with many Republican-controlled states refusing to expand Medicaid – healthcare for low-income people – under the scheme.

With several members of the committee facing election races in their own state on November 3rd, this week’s judiciary committee hearing sometimes resembled a local election party broadcast. Graham, up for re-election in South Carolina, spent much of his opening statement on Tuesday describing how Obamacare works in his state, and misleadingly arguing that states such as California and New York do better under the plan.

Democrats displayed emotive photographs of constituents who would be adversely affected if Obamacare was overturned.

Kamala Harris, capitalising on a primetime TV opportunity as she campaigns to become vice-president, declared: “Republicans finally realised the ACA is too popular to repeal in Congress, so now they are trying to bypass the will of voters and have the supreme court do their dirty work.”

It was an effective message. Democrats in the House of Representatives ascribe their own strong performance in the 2018 midterm elections to Nancy Pelosi’s decision to campaign on healthcare issues. They are hoping that the same strategy may work again.

The election on November 3rd may overwhelmingly be a referendum on Donald Trump, but bread-and-butter issues such as healthcare also matter.