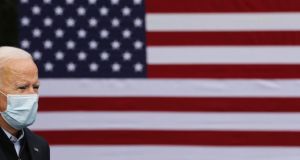 Many of his customers are immigrants from Yemen, Iraq, Lebanon and around the Middle East, and his produce must meet a variety of tastes.

Since the pandemic struck, business has nosedived. “When customers come, they are buying small amounts of products. There is no one buying in bulk, spending hundreds of dollars,” he says. He estimates business is down at least 50 per cent.

Abu Ali, who declined to offer his full name, is animated when discussing president Donald Trump’s handling of the coronavirus crisis. “He should stay at home and let the smart people handle [the response to the pandemic],” he says.

Democratic presidential candidate Joe Biden’s campaign has expended much effort reaching out to Muslim Americans, many of whom are of Arab origin

Dearborn is home to the largest Middle Eastern community in the US, with about 40 per cent of its 100,000 residents thought to be of Arab origin – exact figures are hard to come by as the US census does not differentiate between white and Arab.

Throughout the city, located on the southside of Detroit, signs advertising immigrant lawyers and Arab-American dentists are commonplace, as are billboards urging locals to vote next month. At Hemlock Park, a popular green space, the sound of Lebanese songs streams from passing car windows.

“As the community grew, it’s taken over a lot of places that were abandoned in the 1970s and ’80s,” says Ahmad Chebbani, chairman of the Dearborn-based American Arab Chamber of Commerce, who immigrated from Lebanon in 1979.

“We have become a centre of attraction for various Arab-American communities from Chicago, Indiana, Ohio and Arabs from Canada. ”

The community’s success in business has more recently translated to political clout on the national level. In 2018, Rashida Tlaib, a Muslim of Palestinian descent who represents several Detroit districts, was elected to the US House of Representatives. Tlaib was the first Muslim to enter the state legislature and the joint-first Muslim from an immigrant background elected to Congress, alongside Ilhan Omar of Minnesota.

Democratic presidential candidate Joe Biden’s campaign has expended much effort reaching out to Muslim Americans, many of whom are of Arab origin. He has brought on board a senior advisor for “Muslim engagement”, and his campaign website has a dedicated “agenda for Muslim-American communities” page.

In July, Biden spoke virtually at the Mission Muslim Votes Summit held by the Muslims advocacy group Emgage Action. Organisers say that more than 3,000 people RSVPed for the event, and that it was the first time a presidential candidate directly addressed Muslim Americans.

'In the past, America caused a lot of problems in the Arab world'

At the summit, Biden said: “If I have the honour of being president, I will end the Muslim ban on day one.”

The so-called Muslim ban was introduced by a series of presidential executive orders in 2017. It saw citizens of a number of countries, including seven Muslim-majority states – five that are Arab states (Iraq was later removed) – banned or severely restricted from receiving a variety of visas to enter the US.

Separately, refugee numbers have tumbled under the Trump administration. The refugee cap was cut to 18,000 in the 2020 fiscal year that ended on September 30th, and only 11,814 refugees had been resettled by that, according to government figures. The cap was 67,000 fewer than in the last year of the Obama administration.

On top of the travel ban and restriction on refugee resettlements, immigration officials under the Trump administration have stepped up efforts to deport immigrants who have committed criminal acts. The case of Detroit native Jimmy Aldaoud, who was born in Greece to Iraqi parents, has struck many in the Arab community.

An Iraqi national who had lived legally in the US from the age of six months, he was deported to Iraq in 2019. Aldaouad, who had bipolar disorder and schizophrenia and had been in and out of jail, was last arrested on a larceny charge.

Having never set foot in Iraq before and speaking no Arabic, Aldaoud is reported to have been unable to find insulin to treat his diabetes and was found dead in Baghdad two months after his deportation. His body was returned to Michigan and buried in Sterling Heights.

The case – one of about 350 involving Iraqi nationals from around America being rounded up and deported last year – has roiled many among the Arab community in Dearborn including Tlaib, who is is up for election next month.

However, not all Arab Americans are likely to back Biden. Many, especially the almost 2 million-strong Arab Christian community, could lean towards Trump due, in part, to his verbal promises to help Christians in Iraq. At a rally outside Detroit last January, the president singled out the community for praise. He said he would keep Michigan’s “wonderful Iraqi Christians”, referring to the threat of deportation facing hundreds of Christian immigrants from Iraq.

For Abu Steif, who came to Michigan from Mosul in 2013, public comments like this mean a lot. A member of the Chaldean Catholic community, he runs a restaurant in the Sterling Heights district north of Detroit. He left the northern Iraqi city just months before it fell to Islamic State insurgents.

“Donald Trump! ” he exclaims, and is echoed by his co-workers within earshot, when asked who he would vote for on November 3rd. “He doesn’t like war; he doesn’t like interfering in other countries. In the past, America caused a lot of problems in the Arab world.”

Deportations aren’t the only issue of concern among Detroit’s Arabs this election season. The pandemic has hit Dearborn’s large restaurant scene hard. In-house dining was banned by Michigan’s Democratic governor, Gretchen Whitmer, in March and though that has since been lifted, business has yet to recover.

Ahmad Chebbani of the chamber of commerce estimates that about 40 per cent of businesses have closed, with those owned by new immigrants suffering most.

“There’s a concentration [of closures] in the services industry,” he says. “Some may never come back.”