Cash found ‘between buttocks’ of Bolsonaro ally in police raid 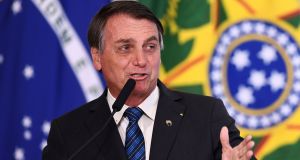 Brazilian president Jair Bolsonaro: Last week said he had ended the country’s Car Wash anti-corruption drive “because there is no more corruption in government”. Photograph: Evaristo Sa/AFP via Getty Images

A senior ally of Brazil’s far-right president Jair Bolsonaro was found hiding money in his underwear by police investigating the embezzlement of public funds destined to combat the coronavirus pandemic.

Around 30,000 reais (€4,500) in cash was seized during Wednesday’s raid on the home of senator Chico Rodrigues, who is the deputy leader of Mr Bolsonaro’s government coalition in the senate. Police reported the senator attempted to hide part of the money in between his buttocks.

Mr Rodrigues has denied any wrongdoing but was nevertheless sacked by the president from his leadership position in the senate after becoming the butt of national ridicule once the details of the police operation became known.

The cash hidden in Mr Rodrigues’s underwear is the latest indication that Brazil’s official response to the pandemic has fallen victim to rampant corruption. A growing number of investigations under way across the federal, state and municipal spheres of government have shone a light on a wide variety of alleged corruption schemes targeting the country’s public health sector.

The governors of Rio de Janeiro and Santa Catarina states are already facing impeachment after evidence emerged that their administrations had misappropriated tens of millions of reais from their responses to the pandemic.

Brazil has one of the world’s highest mortality rates for Covid-19 with the country’s death-toll now approaching 152,000. The number of daily deaths has diminished since the peak of the pandemic in late July but the seven-day average is still registering almost 500 deaths a day.

For Mr Bolsonaro the embarrassing details of the raid targeting a key political ally come just a week after he said he had ended the country’s Car Wash anti-corruption drive “because there is no more corruption in government”.

But in a filing with the Organisation for Economic Co-operation and Development, the Brazil branch of anti-corruption organisation Transparency International said: “On the contrary, the data points to a dismantling under way of the institutional framework for fighting corruption, for which the president of the Republic is one of those responsible.”

Mr Bolsonaro, a political outsider who was elected president in 2018 in part as a reaction against the corruption of Brazil’s traditional political class, is himself under investigation along with two of his three sons for embezzling the salaries of staff they employed as elected officials before he became president.

He is also being investigated by the supreme court into allegations by his former justice minister, the Car Wash judge Sergio Moro, that he interfered in the command of the federal police force in order to stymie its investigations into his family.

Mr Bolsonaro has also faced ridicule after his nominee to fill the first vacancy to open up on the country’s supreme court during his presidency was shown to have plagiarised whole sections of a postgraduate dissertation he completed at a Portuguese university in 2015.