US election: Trump travels to Florida as he steps up campaigning

‘The longer Donald Trump is president, the more reckless he gets,’ Biden tells Delaware 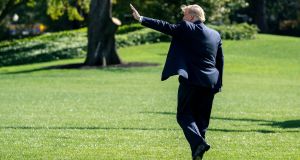 US president Donald Trump departed for Florida on Friday, kicking off a weekend of campaigning as he seeks to win a second term in the White House.

With just 10 days to go until election day, Mr Trump was due to hold two campaign events in Florida, before spending the night at his Mar-a-Lago estate in Palm Beach. This included a “Make America Great Again” rally at The Villages, the largest retirement community in the United States, where residents voted for him by two to one in 2016.

Recent polls suggest the president’s support is slipping among over-65s in the key swing state. Mr Trump is expected to vote on Saturday while in Florida.

Former president Barack Obama is also visiting the Sunshine State this weekend. He is scheduled to hold a drive-in rally in northern Miami on Saturday – his second official campaign event for his former vice-president Joe Biden, the Democratic candidate for president. Mr Obama is expected to encourage Floridians to vote early – a key theme of his event in Philadelphia on Wednesday night.

In a speech in Delaware on Friday, Mr Biden slammed Mr Trump’s response to the coronavirus pandemic. “The longer Donald Trump is president, the more reckless he gets. We don’t have to be held prisoner by this administration’s failures. We can take a different path.”

He continued: “The pandemic doesn’t play favourites, nor will I. No red states or blue states – the United States.”

Setting out his Covid-19 strategy if elected president, Mr Biden pledged to work with state governors during the transition period, and increase testing sevenfold. “Every healthcare worker will have a reliable supply of properly fitted N-95 masks,” he said, stating that frontline healthcare workers are still rationing their personal protective equipment, nine months after the start of the crisis.

“How about that debate last night? The president took to the stage and he took the fight straight to Joe Biden, and he won that debate, hands down,” he said at the event in Swanton, Ohio.

“I saw Joe was looking at his watch – I figured he was trying to figure out how soon this thing’s going to be over,” he said, referring to a moment towards the end of the presidential debate when Mr Biden glanced at his watch.

Amid indications that the Democratic candidate is well ahead of the president in terms of fundraising, the Trump campaign announced it raised $26 million in donations on the back of Thursday night’s debate, its biggest daily online fundraising haul ever, according to campaign chairman Bill Stepien.

Separately, Mr Trump hailed a new agreement between Sudan and Israel following the US decision to remove Sudan from the list of state sponsors of terrorism earlier this week as a further step towards peace in the Middle East.