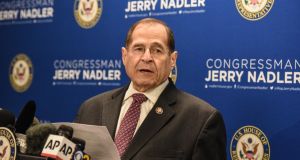 Congressional Democrats have ramped up their investigations into Donald Trump’s conduct by issuing a subpoena for an unredacted version of Robert Mueller’s report, setting the stage for a legal battle that is likely to dominate US politics well into next year’s presidential campaign.

Friday’s writ from Jerrold Nadler, chairman of the House of Representatives judiciary committee, seeks not only a complete version of the special counsel’s report into Russian election meddling and Mr Trump’s attempts to thwart the investigation, but also documents and “investigative materials” obtained by Mr Mueller’s staff.

“The redactions appear to be significant,” Mr Nadler said. “Even the redacted version of the report outlines serious instances of wrongdoing by President Trump and some of his closest associates.”

Mr Nadler has threatened to subpoena the complete report for weeks but the move has been given new significance by Thursday’s publication of a redacted version of Mr Mueller’s report, which revealed that the special counsel expected Congress to determine whether Mr Trump had illegally attempted to obstruct the Russia investigation.

“The separation-of-powers doctrine authorises Congress to protect official proceedings, including those of courts and grand juries, from corrupt, obstructive acts regardless of their source,” Mr Mueller wrote, adding that a congressional investigation into obstruction “accords with our constitutional system of checks and balances and the principle that no person is above the law”.

The admonition from Mr Mueller puts Mr Trump in new legal jeopardy just weeks after he asserted he had been completely exonerated by the justice department. Mr Nadler said that it would now fall to Congress to “determine the full scope of that alleged misconduct”.

Statements are made about me by certain people in the Crazy Mueller Report, in itself written by 18 Angry Democrat Trump Haters, which are fabricated & totally untrue. Watch out for people that take so-called “notes,” when the notes never existed until needed. Because I never....

...agreed to testify, it was not necessary for me to respond to statements made in the “Report” about me, some of which are total bullshit & only given to make the other person look good (or me to look bad). This was an Illegally Started Hoax that never should have happened, a...

Despite Mr Mueller’s apparent backing of congressional action, the justice department is expected to resist the subpoena, possibly in court. William Barr, the US attorney general, has said the redactions are necessary to protect ongoing investigations, national security sources and secret grand jury proceedings.

In addition to seeking the unredacted report, both Mr Nadler and California Democrat Adam Schiff, chair of the House intelligence committee, have written to Mr Mueller to request he testify before Congress. Mr Barr is expected to appear early next month.

The attorney general has come in for heavy criticism from Democrats, who have accused him of serving as an advocate for Mr Trump rather than the nation’s top law-enforcement officer. Some of Mr Barr’s assertions, including that guidelines against indicting a sitting president had no effect on Mr Mueller’s decision not to charge Mr Trump, were contradicted by the report itself.

“[The supoena] commands the department to provide Congress with millions of records that would be plainly against the law to share because the vast majority of these documents came as a result of nearly 2,800 subpoenas from a grand jury that is still ongoing,” Mr Collins said.

Mr Trump has made few public remarks about the report since it was published, though used his Twitter account on Friday morning from his Mar-a-Lago resort to denounce the “CrazyMueller Report”, which he said had been written by “18 Angry Democrat Trump Haters”.

He also dismissed the testimony of former aides as “fabricated & totally untrue”.

“Because I never agreed to testify, it was not necessary for me to respond to statements made in the ‘Report’ about me, some of which are total bullshit & only given to make the other person look good (or me to look bad),” he wrote.

In his report, Mr Mueller said Mr Trump’s written answers provided to the inquiry after he refused to speak with investigators were “inadequate”. He added that while he and his team had considered issuing a subpoena to force the president to answer questions, they decided against such a move out of concern it would delay its conclusion for months. – Copyright The Financial Times Limited 2019