Kim to meet Putin in Russia as relations with US falter 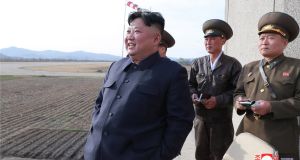 The North’s official Korean Central News Agency did not specify what type of weapon was involved in the test. File Photograph: KCNA/EPA

North Korean leader Kim Jong-un will travel to Russia this month for talks with President Vladimir Putin, the Kremlin said on Thursday, announcing the first Russia-North Korea summit since Mr Kim came to power in 2011.

The announcement coincided with a moment of discord in efforts by US president Donald Trump’s administration to reach a deal with Mr Kim to end nuclear tensions on the Korean peninsula.

North Korea said on Thursday it no longer wanted to deal with US secretary of state Mike Pompeo and called for him to be replaced in talks by somebody more mature.

That demand came shortly after North Korea announced that Mr Kim had overseen the testing of a new tactical guided weapon, which KCNA, the North’s official news agency, said has a “peculiar mode of guiding flight” and “a powerful warhead.”

It was the North’s first weapon test since talks in Vietnam between Mr Kim and Mr Trump in late February broke down over conflicting demands by North Korea for sanctions relief and by the United States for North Korea to abandon its nuclear programme.

KCNA gave no details on the weapon that was tested on Wednesday but implied it was a short-range weapon rather than the long-range ballistic missiles that have been seen as a threat to the United States.

The agency quoted senior foreign ministry official Kwon Jong-gun as saying the Vietnam summit, the second between the two leaders, showed that talks could go wrong “whenever Pompeo pokes his nose in”.

“I am afraid that, if Pompeo engages in the talks again, the table will be lousy once again and the talks will become entangled,” Mr Kwon said. “Therefore, even in the case of possible resumption of the dialogue with the United States, I wish our dialogue counterpart would be not Pompeo but another person who is more careful and mature in communicating with us.”

A spokeswoman for the US State Department said it was aware of the report about Mr Pompeo and added: “The United States remains ready to engage North Korea in a constructive negotiation.”

The pro-Kremlin Izvestia newspaper cited a diplomatic source on Wednesday as saying the Putin-Kim meeting would likely take place next week in Russia’s far eastern city of Vladivostok before Mr Putin flies on to an April 26th-27th summit in China.

It added, however, that a sudden change of plan by Mr Kim could not be ruled out. The Kremlin gave no further details in a statement on its website, but Moscow has been saying for months that it was working on such a meeting.

Mr Kim came to power in 2011 following the death of his father, Kim Jong-il, who had visited Russia for a summit with then president Dmitry Medvedev earlier that year. It was not clear how Mr Kim might travel to Russia, which shares a border with North Korea.

The embassy said in a statement that the talks had been “constructive”. – Reuters