US cabinet hopefuls in the frame for Trump seal of approval 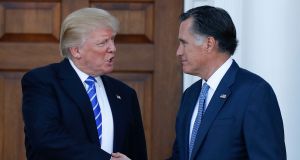 President-elect Donald Trump, working to fill administration positions ahead of his inauguration on January 20th, was scheduled to hold talks in New York on Monday with former Texas Governor Rick Perry who is being considered for cabinet posts including defence, energy and veterans affairs.

Mr Trump met with aides and contenders for top US posts over the weekend at his golf resort in Bedminster, New Jersey, including with Mitt Romney, who was a fierce Trump critic during the presidential campaign and who is now under consideration for secretary of state.

Below are people mentioned as contenders for senior roles. See end of list for posts already filled.

The Trump transition team confirmed he would choose from a list of 21 names he drew up during his campaign, including US Senator Mike Lee of Utah, and William Pryor, a federal judge with the 11th US Circuit Court of Appeals.