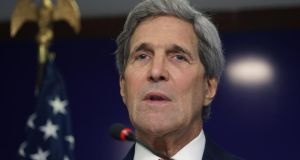 US secretary of state John Kerry, who defended the absence of a high-ranking American leader. Photograph: Rick Wilking/AFP/Getty Images

The Obama White House made the rare move of admitting a mistake by saying that it should have sent a senior leader to join with the heads of 40 countries at Sunday’s unity march in Paris against last week’s terror attacks.

“It’s fair to say that we should have sent someone with a higher profile,” said President Barack Obama’s press secretary Josh Earnest.

The most senior US figure at the march was the ambassador to France, Jane Hartley.

Mr Earnest said that “had the circumstances been a little bit different”, Mr Obama would himself have liked to have attended the march. British prime minister David Cameron and Israeli prime minister Benjamin Netanyahu were among the participants.

Mr Obama was at the White House on Sunday with no public engagements, while vice president Joe Biden was at home in Delaware.

Attorney general Eric Holder was in Paris at a counterterrorism summit but was not among the leaders at the march.

US secretary of state John Kerry defended the absence of a high-ranking US leader. Speaking at a summit in India, he said the country’s relationships with France was “not about one day or one particular moment”, but about “an ongoing, long-time relationship that is deeply, deeply based in the shared values and particularly the commitment that we share in freedom of expression”.

Criticism that no senior Obama administration figure attended the march was “sort of quibbling a little bit” because the US assistant secretary of state Victoria Nuland attended, he said.

He had made a prior commitment to attend the investor summit in India where he met the country’s new prime minister Narendra Modi, and wanted to abide by that.

“I would have personally very much wanted to have been there, but couldn’t do so because of the commitment that I had here,” he said.

The French ambassador to the US, Gérard Araud, said President Obama had expressed strong support for France by visiting the embassy in Washington.

“From the French side there is absolutely no hard feelings,” he said.