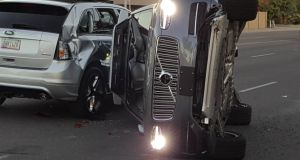 A self-driven Volvo SUV owned and operated by Uber after a collision in Tempe, Arizona, on March 24th. Photograph: Fresco News/Mark Beach/via Reuters

Uber has suspended its fleet of self-driving cars while it investigates a crash in Arizona involving one of its vehicles.

Photographs posted online show the car lying on its side next to another badly damaged vehicle. There were no serious injuries as a result of the incident.

The Uber Technologies car – a Volvo SUV – was carrying two engineers in the front and no backseat passengers, but it is not yet clear whether the car was in self-driving mode at the time of the crash.

The incident is the latest blow for the car-hailing app, which has been left reeling by a series of setbacks in recent weeks, including the departure of its president, Jeff Jones.

Initial police reports suggest the collision was caused by a person who failed to give way to the self-driving car rather than a malfunction by the Uber vehicle.

However, pending further investigation, the company has removed all its self-driving cars from the road in Arizona, as well as test sites in Pennsylvania and California – all three states where it operated the driverless vehicles.

Uber self-driving cars always have a human in the driving seat who can take over the controls.

The latest incident follows recent difficult months for the firm, which has seen a number of high-level executives quit and criticism over workplace practices and ethics.

Meanwhile legal issues have been hampering progress with the testing of its autonomous vehicle technology in California.