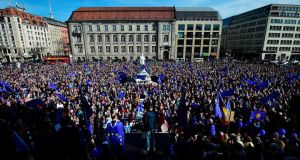 In glorious spring sunshine, tens of thousands of Germans in more than 50 cities took to the streets to celebrate six decades of European unity and to demand at least a further six. Mirroring similar marches all over Europe, some 10,000 Berliners turned out for Saturday’s March of Europe and Sunday’s weekly Pulse of Europe demonstration, drawing a diverse crowd from flag-waving children to glamorous grannies waving signs reading “EU are my Sunshine”.

Dublin, Vienna and Copenhagen joined the growing “Pulse of Europe” movement on Sunday as, at Berlin’s seventh demonstration, Europe’s “Erasmus Generation” joined a cheery rendition of “Happy Birthday” to the EU.

“I grew up with Europe being self-evident and never thought it could be up for disposition,” said Marika Schumann, a 28-year-old university graduate from Berlin. “But now it really looks that way so, for me, the time has come to march.”

After two years of anti-Islam Pegida marches in Dresden each Monday night, Germans took to the streets to distance themselves from the growing nationalist feeling in the country.

“Those people go out and shout, ‘We’re the people’, when they’re just a few thousand people, we’re the people and we stand for this Europe,” said Ulrike Biermann from Potsdam.

Unification vows As EU leaders – minus Britain – renewed their unification vows in Rome on Saturday, marchers in Berlin toppled a symbolic wall of cardboard moving cartons and trampled them underfoot on the strip of ground where once a real wall of concrete and self-firing machine guns divided Europe.

“I’m Greek, my husband is German, we married in Denmark, our first child was born in Budapest and our neighbour is French,” said Elena, who is living a European life in Berlin unthinkable for previous generations.

“The Brexit referendum motivated us and then the Trump election,” said Daniel Röder, co-founder of Pulse of Europe. “We learned that the impossible seems to be possible and the threat for democracy is when people are silent and don’t stand up for it.”

Since last November, dozens of decentralised demonstrations have been held from Stockholm to Göttingen, growing exponentially each week, attracting the very kind of people who never go to demonstrations, all singing along to Beethoven’s Ode to Joy, the EU anthem.

“I find it strange that we have people in Europe calling into question a united Europe, with people thinking isolating themselves makes them stronger,” said Bruno Thiel, from Leipzig.

The aim of Pulse of Europe is to go on the streets every Sunday, at least until next month’s French presidential election, if not beyond. “Everyone is responsible for the failure or the success of our future, no one can make excuses,” Pulse of Europe warns on their website. “Hoping that everything will go well is not enough and even dangerous.”