US president Donald Trump has said he will "respectfully leave" his upcoming summit with North Korean leader Kim Jong-un if he feels "it is not going to be fruitful." Video: The White House 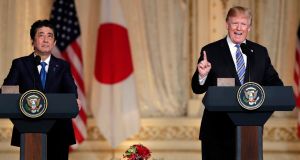 US president Donald Trump moved to temper expectations about a possible meeting with North Korean leader Kim Jong-un, warning that he would walk out of talks if his objectives were not met.

Speaking at the end of a two-day summit with Japanese prime minister Shinzo Abe at his Mar-a-Lago resort in Florida, Mr Trump said he hoped the meeting would be successful but “if we don’t think it’s going to be successful, we won’t have it”.

“If I think that it’s a meeting that is not going to be fruitful, we’re not going to go,” he said at a joint press conference with the Japanese leader. “If the meeting, when I’m there, is not fruitful, I will respectfully leave the meeting.”

Referring to South Korea’s role in facilitating dialogue between North Korea and the United States, Mr Trump again highlighted his own role in making the Winter Olympics in the South Korean city of Pyeongchang in February a success.

“It was my involvement and the involvement of our great country that made the Olympics a very successful Olympics,” he said.

Asked about the status of three American citizens currently being detained in North Korea, Mr Trump said the US was doing its best and “fighting very diligently” to get them released.

“As you know, they’ve been there a long time and it’s harsh treatment,” he said, noting that the US had fought similarly hard for the release of American student Otto Warmbier, who died shortly after his return to the US. “We are likewise fighting very diligently to get the three American citizens back,” he continued. “I think there’s a good chance of doing it. We’re having very good dialogue. We will keep you informed. But we are in there and we are working very hard on that.”

Preparations for a possible meeting between the US president and Kim Jong-un have intensified in recent weeks, with CIA director Mike Pompeo travelling to Pyongyang to meet the North Korean dictator earlier this month. But concerns have been raised in some quarters that Mr Trump has not set the release of the three American citizens as preconditions for the talks to commence.

As the US president spent Thursday in Florida, where he visited a government agency that stops the inflow of illicit drugs into the US, the Senate judiciary committee confirmed it will vote next week on a proposal to protect Robert Mueller, the special counsel appointed to investigate Russian meddling in the 2016 US presidential election. Senator Chuck Grassley, the committee’s Republican chairman, said the vote would go ahead, despite the objections of Senate majority leader Mitch McConnell.

Mr Trump’s repeated dismissal of the special counsel investigation as a “witch-hunt” has prompted fears he may fire Mr Mueller or deputy attorney general Rod Rosenstein, the man who appointed him.

The Bill to be voted on would make it harder for any president to fire a special counsel by allowing the investigator to seek a judicial review if he were to be dismissed.

Meanwhile, the US department of justice was expected to send memos written by former FBI director James Comey to Congress. The memos, which were drafted by Mr Comey and document his meetings with Mr Trump, are understood to form part of Mr Mueller’s investigation into possible obstruction of justice by the president.

Troubles also continued for former deputy FBI director Andrew McCabe. Various media outlets reported that the department of justice had referred documents to the US attorney’s office related to Mr McCabe’s disclosure to a journalist information about the FBI’s investigation into the Clinton Foundation in 2016. The development could signal that a criminal prosecution is being considered.