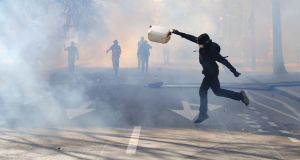 A protester throws a container during clashes with police in Paris on Thursday. Photograph: Zakaria Abdelkafi/AFP/Getty Images

A far-left union bid to turn a protest on Thursday over a shakeup of the state railways into a bigger show of resistance to President Emmanuel Macron appears to have fallen flat, with the labour movement split and fewer people taking part.

Thousands took part in street marches it called in Paris and other cities but the other big union stayed away and criticised the CGT’s endeavour despite their joint battle over the biggest railway reform since nationalisation in 1937.

The CGT was seeking a “convergence of struggles”, where various industrial disputes and causes of discontent fuse in one mass upheaval against the government, as happened in May 1968 and more recently at the end of 1995.

But a CGT strike call at the Paris subway train and bus group RATP appeared to have little impact: RATP management reported normal service across most of the grid.

The march turnout was way short of rallies in the not too distant past. The CGT union said 300,000 people demonstrated across the country, while the interior ministry put the figure at 119,500. The police counted 11,500 marchers in Paris.

By comparison, hundreds of thousands more hit the streets in 2010 to contest a rise in the retirement age which ex-President Nicolas Sarkozy went ahead with anyway. Even the police put the figure at 1.2 million at the height of that protest.

Nonetheless, a sea of flags and slogans fluttering over the crowds showed some people from beyond the state-owned railways joined the fray, including people from the state hospital sectors.

As they did, a rolling strike by rail workers halted train service for the eighth day this month, with just one in three high-speed TGV trains running and SNCF management saying more than 20 percent of staff stopped work.

Two things are working against a repeat of the upheaval that the CGT successfully rallied in late 1995 with the help of broad public support and other unions, forcing the then government to pull rail and welfare reforms.

While the CGT opposes rail liberalisation, one goal of the latest reform, the CFDT union is demanding that the government mop up the SNCF’s €46 billion debt and wants a new deal in place on work conditions when the sector opens to competition.

The head of the CFDT union, Laurent Berger, told a parliamentary news channel that his union had nothing to do with the marches on Thursday, Neither, he said, would it stand side-by-side with the CGT on May 1st, a day when labour rights are celebrated in France and many other countries.

He said he did not share the CGT objective of uniting very different groups with very different grievances, from railway workers to power sector employees and state hospital staff, and even some students involved in very separate protests about university entry criteria.

Mr Macron (40) has stood firm and on Wednesday urged the rail unions to “stop holding the country hostage”.

Public support for the SNCF protest is weaker than for all but one of several dozen major protests over the last 20 years in France, according to an Ifop poll published last Sunday. It showed 42 percent were sympathetic to the strikers.

That compared with much bigger support rates of two-thirds or so when the strikes waged by rail workers at the end of 1995 snowballed into a broader public-sector protests, ultimately prompting president Jacques Chirac to dissolve his government.

While polls suggest 60 per cent of the French want Mr Macron to pursue his rail shake-up, he has tested the public mood after cutting wealth tax and housing aid and raising pensioner taxes. Those changes, the polls say, have cemented voter belief that Mr Macron is bad for purchasing power and economic equality.– Reuters