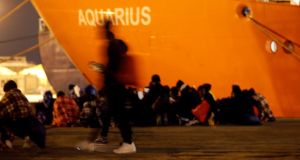 File photo: Migrants disembark from the MV Aquarius, a search and rescue ship run in partnership between SOS Mediterranee and Medecins Sans Frontieres, after it arrived in Augusta on the island of Sicily, Italy on January 30th, 2018 Photograph: Reuters/Antonio Parrinello

The Libyan coast guard picked up a total of 315 migrants in the Mediterranean Sea on Wednesday who were trying to reach Europe in three inflatable boats, a spokesman said.

The migrants, who included 275 men, 32 women and eight children from different sub-Saharan and Arab countries, were moved to detention centres.

Libya’s western coast is a main departure point for migrants fleeing wars and poverty and hoping for new lives in Europe, though the number of crossings has dropped sharply since July 2017.

Coast guard spokesman Ayoub Qassem said a patrol rescued 116 illegal migrants in an inflatable boat 50 miles off the town of Zawiya. A further 199 migrants were picked up from two inflatable boats off Kums.

Since last year, smuggling networks inside Libya have been disrupted under Italian pressure. Libya’s coastguard, backed by the European Union, has stepped up interceptions, returning more than 7,000 migrants to Libya this year. – Reuters