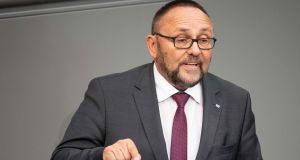 Alternative Für Deutschland politician Frank Magnitz had allegedly been beaten with a “piece of timber” and kicked as he lay on the ground in Bremen. Photograph: Fabian Sommer/AFP/Getty Images

Next week Germany marks the centenary of the moment its inter-war democracy was left with blood on its hands: the murder of Communist Party co-founders Rosa Luxemburg and Karl Liebknecht.

On January 19th, 1919, the two were seized by members of the Freikorps – right-wing paramilitaries granted carte blanche to root out the enemies of the Social Democrat government. Interrogated in a Berlin hotel, tortured and badly beaten, Liebknecht was shot in the back while Luxemburg was shot and her body dumped in a city canal.

Germany’s brutal transition from monarchy to parliamentary democracy and the doomed Weimar Republic – and its fascist Third Reich successor – has sensitised German people to political violence.

Thus there was political paralysis on Monday when news broke that a regional leader of the far-right Alternative für Deutschland (AfD) was badly beaten by three masked men in the northern city of Bremen.

Frank Magnitz (66), the AfD’s Bremen leader, left a New Year’s reception hosted by a local newspaper when he was set upon. He cannot remember the attack but says passing construction workers, who intervened to end the attack, said he had been beaten with a “piece of timber” and kicked as he lay on the ground.

After sharing images of his swollen, bloody face on social media, the injured man left hospital on Wednesday telling the Bild tabloid that he was suffering “terrible pain” on his entire left side.

As Germany’s other parties struggled to respond to the attack, AfD Bundestag co-leader Alexander Gauland pounced on their hesitation on Tuesday as proof of double standards in German politics.

Opponents suggest the party is itself to blame, after adopting radical rhetoric to boost its political profile

The “cowardly, life-threatening violence” and “attempted murder” of the attack, he said, was the “result of incitement of politicians and media against us”. In its meteoric rise the AfD has been the target of attacks against regional offices as well as politicians’ homes and cars. Several party figures have police protection but the Bremen attack was the most violent to date.

Opponents suggest the party is itself to blame, after adopting radical rhetoric to boost its political profile. When the AfD entered the Bundestag in 2017 as the largest opposition political party, its leaders promised on election night to “hunt down” its opponents. But many set aside their concerns and agreed with Germany’s president Frank-Walter Steinmeier. After the Bremen attack he condemned every form of violence on a public office-holder as an attack on Germany’s rule of law. “We must stand united against that,” he said.

A spokesman for chancellor Angela Merkel condemned the attack and expressed hope the police would soon find the perpetrator. Federal justice minister Katarina Barley wished the politician a full recovery but she accused the AfD of “instrumentalising” attacks as political propaganda to attract support.

Her remarks came as Bremen police contradicted key elements of the AfD version of events. Video camera footage suggests Magnitz was jumped on from behind by one man, with two others nearby. The politician fell and hit his head on the ground.

“We assume that the injuries are the result of the fall,” said Bremen state prosecutor Frank Passade, adding the video footage showed no kicks or blows with a piece of wood.

The AfD Bremen said it had been unable to track down the construction worker who intervened to stop the attack, and who it said mentioned the “piece of timber” referenced in the party’s own press release. A spokesman said he could not recognise “anything consciously incorrect” in its statement.

Ahead of next week’s Luxemburg-Liebknecht centenary, historians suggest the return of violence to German politics reveals unresolved trauma in its political history.

For Irish Research Council-funded historian Mark Jones, the AfD attack exposes the left’s struggle to acknowledge its historical use of political violence – justified even by icons such as Rosa Luxemburg.

Meanwhile, the Bremen attack is “gold dust” to the AfD, he says, because it provides proof of the conspiracy it sees being waged against it and the German people.

“They almost need acts of violence against their group to mobilise their world view,” said Jones, assistant professor of history at UCD and author of Founding Weimar: Violence and the German Revolution of 1918-1919. “There’s no doubt about who the political winners are here: the AfD.”