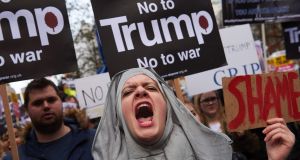 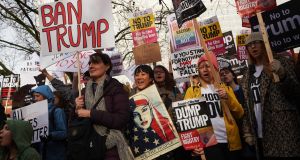 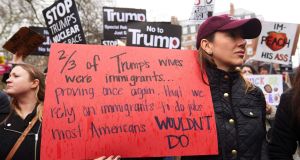 Tens of thousands of protesters have taken part in marches across the UK condemning Theresa May’s state visit invitation to Donald Trump.

Demonstrators urged the British prime minister to withdraw her controversial invite and denounced the American president’s travel ban as “racist”.

The Stop the War Coalition, which helped to organise the “Stop Trump’s Muslim Ban — Stop May Supporting It” march, said 40,000 people had taken to the streets in London, while similar protests were organised in Belfast and Edinburgh.

Crowds brandished placards declaring “No to scapegoating Muslims” and “No to Trump, No to War” as they walked. Another sign read: “Kitten heels grow some claws, stop appeasing racist laws.”

Chants of “Theresa May shame on you” and “Donald Trump is not welcome here” echoed through the streets of central London as protesters marched from the US Embassy to Downing Street — lining the length of Whitehall back to Trafalgar Square.

Jeremy Corbyn told the crowds in a video message that Mr Trump’s state visit invite “should be withdrawn until the executive orders are gone and every element of them repealed”.

The Labour leader said: “I support the campaign of millions of people in Britain that Donald Trump should not be welcomed on a state visit to this country.”

Mr Corbyn, who thanked the protesters for “standing up for what is right”, added: “Theresa May and the Conservatives are on the wrong side of history.”

Activist John Rees, co-founder of Stop the War Coalition, said Mrs May had a choice to either “insult the American president, or insult a majority of people in this country who don’t share that president’s views on practically any issue you care to mention”.

“She’s got a choice: she can either insult him, or us.”

Mr Rees also claimed that Theresa May had “walked into a storm wholly bigger than she could imagine” and urged her to “disinvite” the president.

He said that the “fear and division” was evident in schools and told the masses gathered: “I’m here to say that every teacher should be involved in the campaign against Trump.

Dawn Butler, MP for Brent Central, told the crowds that Mrs May needed to “understand the responsibility” of the UK’s relationship with the US.

A petition calling on the Government to prevent Mr Trump from making a state visit because it would cause “embarrassment” to the Queen has received more than 1.8 million signatures.

Downing Street rejected claims the Queen has been put in a difficult position due to the invitation and insisted the state visit would go ahead this year, but MPs will debate the matter later this month.

Since the ban was announced, there have been protests at several US airports where travellers were being held, including at least 2,000 protesters at New York’s Kennedy International Airport, while thousands took to the streets of the UK amid anger over the ban.