US presidential nominees Donald Trump and Hillary Clinton go after one another during their second televised debate, where Trump interrupted Clinton several times to bring up her private e-mail server. Video: Reuters 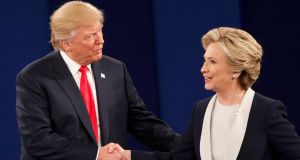 The gloves came off in the second US presidential debate as Donald Trump and Hillary Clinton clashed in ugly exchanges over the leaked tape showing the Republican bragging about sexually assaulting women.

The 2005 tape recording that has rocked the race for the White House over the weekend and plunged the Republican Party into crisis was raised early in the televised encounter between the candidates in St Louis, Missouri.

The tone was set at the outset when the two nominees took the stage and chose not to shake hands as the debate began, capping an extraordinary weekend in the American presidential campaign.

The debate was defined by insults and interruptions by Mr Trump in a more engaged and effective debate for the Republican as he stuck to his campaign messages and jabbed at his Democratic rival again and again.

His performance is likely to please his supporters, but it is unclear whether it will broaden his base and reverse Mrs Clinton’s resurgence in the polls. She was reserved in her counter-attacks against the heavy blows thrown by the Republican.

Mr Trump described his lewd 2005 remarks caught on tape as “locker room talk” when he was asked by an audience member in town-hall style event about the candidates being role models for young people.

“I’m not proud of it,” said the Republican presidential nominee about his 11-year-old comments that surfaced late on Friday. “I apologise to my family, to the American people. Certainly I’m not proud of it. But this is locker-room talk.”

The businessman changed the subject, turning sharply to talk about the threat posed by the Islamic State, seeming to suggest that his remarks were not as bad as the militant group in the Middle East.

Asked three times by co-moderator, Anderson Cooper of CNN, whether he had kissed or groped women without consent – as he had boasted about in the leaked tape – Mr Trump eventually replied: “No, I have not.”

Mrs Clinton challenged Mr Trump’s assertion in the video apology he issued over the leaked tape, saying his remarks “represent exactly what he is” and were in line with how he has denigrated women in comments made during his campaign.

“Yes, this is who Donald Trump is,” said the Democratic presidential nominee.

When the subject was raised again, the Republican candidate counter-punched hard. He referred to accusations of sexual assault and harassment made against former US president Bill Clinton by three women.

Tensions ran high heading into the debate that Mr Trump signalled that he would raise the accusations in the debate.

He held a surprise press conference beforehand with three women who had accused Mr Clinton of sexual misconduct and a woman who was a victim in a 1970s rape case in which Mrs Clinton, a lawyer, defended the accused.

“If you look at Bill Clinton, far worse - mine were words and his was action,” Mr Trump said when he asked whether he was a different man when he spoke in vulgar terms about women on tape 11 years ago or did his behaviour continue until recently.

“There’s never been anybody in the history of politics in this nation that’s been so abusive to women,” said Mr Trump of the former 42nd US president.

The billionaire property developer accused Mrs Clinton of attacking her husband’s accusers “viciously”. The camera cut away at one point to a poker-faced Bill Clinton in the audience listening attentively to Mr Trump.

“I will tell you that when Hillary brings up a point like that and she talks about words that I said 11 years ago,” he said. “I think it’s disgraceful and I think she should be ashamed of herself if you want to know the truth.”

Mrs Clinton did not address the accusations raised against her husband, citing the words of US first lady Michelle Obama in response: “When they go low, you go high.”

“If this were just about one video, maybe what he’s saying tonight would be understandable, but everyone can draw their own conclusions at this point about whether or not the man in the video or on the stage represents women,” she said.

The two candidates swapped barbs over Mr Trump’s criticism of a Muslim-American couple who lost their son in Iraq and Mrs Clinton’s decision to delete 33,000 emails on the personal server she used during her time as President Barack Obama’s first secretary of state between 2009 and 2013.

Questioning some of his claims about her emails, Mrs Clinton said: “It’s just awfully good that someone with the temperament of Donald Trump is not in charge of the law of our country.”

“Because you’d be in jail,” Mr Trump snapped, eliciting a cheer from the television audience, marking the first time in a modern US presidential election that one candidate threatened to imprison another.

The television celebrity, who called Mrs Clinton “the devil” at another point in the debate, pledged to appoint an investigator to look into Mrs Clinton over her decision to delete her emails.

“If I win, I’m going to instruct the attorney general to get a special prosecutor to look into your situation because there’s never been so many lies, so much deception,” he said.

The two candidates sparred over recently disclosed emails that showed Mrs Clinton telling a Wall Street audience during paid speeches about adopting two different positions, one in private and one in public.

Mrs Clinton said that her dual position of having two different stances on a policy issue was a reference made to President Abraham Lincoln’s skill at using different strategies to force members of the US congress to pass the 13th amendment abolishing slavery as depicted in Steven Spielberg’s 2012 biopic.

Mr Trump said that the Wikileaks disclosure of her two positions showed she had been “caught in a total lie” and he ridiculed her reference to President Lincoln.

The Republican candidate was asked about his running mate Mike Pence contradicting him in the vice-presidential debate last week when he said he would take military action in Syria’s civil war and take a tougher approach against Russia’s involvement in the war-torn Middle Eastern country.

“He and I haven’t spoken, and I disagree,” he said, pointing to sharp divisions within his own ticket.

The night ended with an exchange of rare compliments when, after 90 minutes of vicious debate, a member of the audience asked them to name a positive they respected in the other, eliciting laughs and applause.

Mrs Clinton said that she respected Mr Trump’s children saying they were “incredibly able and devoted, and I think that says a lot about Donald.”

“I don’t agree with nearly anything else he says or does but I do respect that,” she said.

The third and final debate of the presidential campaign takes place in Las Vegas on October 19th – 20 days before Americans go to the polls to vote for their next president.