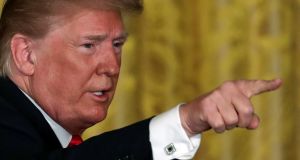 US president Donald Trump concludes his remarks at a meeting of the National Space Council at the White House in Washington, on Monday. Photograph: Jonathan Ernst/Reuters

Donald Trump has said the US will not become a “migrant camp” as his administration defended its practice of separating migrant children from their parents at the southern border.

Mr Trump blamed Democrats for the policy on Monday, claiming that “all of the problems” in US immigration are “very strongly the Democrats’ fault”.

The comments came as the administration faced intense criticism for a zero-tolerance enforcement policy that has resulted in the separation of nearly 2,000 children from their parents in just six weeks.

The separation tactic has drawn a backlash from prominent lawmakers in both major US parties, human rights advocates and religious leaders who have called the tactic cruel and inhumane.

On Sunday, US first lady Melania Trump made a rare political intervention when she said in a statement she “hates” to see family separations and called for government “with heart” to achieve successful immigration reform.

Mr Trump’s comments on Monday followed a series of tweets in the morning in which the president ignored a chorus of condemnation about the policy that has led to more than 1,600 children being separated from their parents since May.

In a remarkable swipe, Mr Trump also took to Twitter to note that Germans were “turning against their leadership” over a migration standoff that was “rocking the already tenuous Berlin coalition”.

Others dismissed Mr Trump’s claim that crime in Germany was “way up” over migration. Data last month showed Germany’s lowest number of criminal offences since 1992 and the crime rate falling even more quickly among non-German suspects.

But since accepting about 1.4 million people in 2015-2016, subsequent terror attacks and other violent crimes involving migrants have swung public opinion towards a tougher migration policy, as proposed by chancellor Angela Merkel’s Bavarian coalition partners.

Dr Merkel fears such unilateral action will destablise Europe and topple her government after less than 100 days. – Additional reporting the Guardian