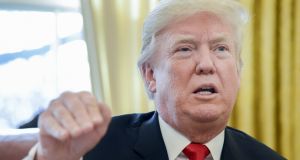 US president Donald Trump has said he believes Robert Mueller, the special counsel in the Russia investigation, will treat him fairly, contradicting some members of his party who have waged a weeks-long campaign to try to discredit Mueller and the continuing inquiry.

During an impromptu 30-minute interview with the New York Times at his golf club in West Palm Beach, Mr Trump did not demand an end to the Russia investigations swirling around his administration, but insisted 16 times that there had been “no collusion” discovered by the inquiry.

“I have absolute right to do what I want to do with the justice department,” he said, echoing claims by his supporters that as president he has the power to open or end an investigation. “But for purposes of hopefully thinking I’m going to be treated fairly, I’ve stayed uninvolved with this particular matter.”

Hours after he accused the Chinese of secretly shipping oil to North Korea, Mr Trump explicitly said for the first time that he had “been soft” on China on trade in the hope that its leaders would pressure North Korea to abandon its nuclear weapons programme.

He hinted that his patience might soon end, however, signalling his frustration with the reported oil shipments. “Oil is going into North Korea. That wasn’t my deal,” he said, raising the possibility of aggressive trade actions against China. “If they don’t help us with North Korea, then I do what I’ve always said I want to do.”

Despite saying that when he visited China in November, President Xi Jinping “treated me better than anybody’s ever been treated in the history of China”, Mr Trump said “they have to help us much more ... We have a nuclear menace out there, which is no good for China,” he said.

Trump gave the interview in the Grill Room at Trump International Golf Club after he ate lunch with his playing partners, including his son Eric and professional golfer Jim Herman. No aides were present for the interview, and the president sat alone with a New York Times reporter at a large round table as club members chatted and ate lunch nearby.

A few times, members and friends – including a longtime supporter, Christopher Ruddy, the president and chief executive of the conservative website and TV company Newsmax – came by to speak to Mr Trump.

Noting that he had given Herman $50,000 years ago when he worked at the president’s New Jersey golf club and was trying to make the PGA Tour, the president asked him how much he made playing on the professional circuit. “It’s like $3 million,” Herman said. “Which to him is like making a billion because he doesn’t spend anything,” Mr Trump joked. “Ain’t that a great story?”

The president also touted the strength of his campaign victories and his accomplishments in office, including passage of a tax overhaul this month. But he also expressed frustration and anger at Democrats, whom he said refused to negotiate on legislation.

“Like Joe Manchin, ” he said, referring to the Democratic senator from West Virginia. He said Manchin and other Democrats claimed to be centrists but refused to negotiate on healthcare or taxes. “He talks. But he doesn’t do anything. He doesn’t do,” Trump said. “’Hey, let’s get together, let’s do bipartisan.’ I say, ‘Good, let’s go.’ Then you don’t hear from him again.”

Nonetheless, Mr Trump said he still hoped Democrats will work with him on bipartisan legislation in the coming year to overhaul healthcare, improve the country’s crumbling infrastructure and help young immigrants brought to the country as children.

Later he added that he knows more about “the big bills” debated in the Congress “than any president that’s ever been in office”.

The president also spoke at length about the special election this month in Alabama, where Roy Moore, the Republican candidate, lost to a Democrat after being accused of sexual misconduct with young girls, including a minor, when he was in his 30s.

Mr Trump said he supported Mr Moore’s opponent in the Republican primary race because he knew Mr Moore would lose in the general election. And he insisted that he endorsed Mr Moore later only because “I feel that I have to endorse Republicans as the head of the party.”

Mr Mueller’s investigation appears to be moving ahead despite predictions by the president’s lawyers this year that it would be over by Thanksgiving. Mr Trump said he was not bothered by the fact that he does not know when it will be completed because he has nothing to hide.

He repeated his assertion that Democrats invented the Russia allegations “as a hoax, as a ruse, as an excuse for losing an election”. He said “everybody knows” his associates did not collude with the Russians, even as he insisted that the “real stories” are about Democrats who worked with Russians during the 2016 campaign.

“There’s been no collusion. But I think he’s going to be fair,” Mr Trump said of Mr Mueller. In recent weeks Republican lawmakers have seized on anti-Trump texts sent by an FBI investigator who was removed from Mueller’s team as evidence of political bias. At a hearing this month, Republican congressman Jim Jordan of Ohio said that “the public trust in this whole thing is gone”.

Mr Trump raised questions about how the Mr Mueller had dealt with lobbyist Tony Podesta. Mr Podesta is the brother of Hillary Clinton’s campaign chairman, John D Podesta, and Tony Podesta is under investigation for work his firm, the Podesta Group, did on behalf of a client referred to it in 2012 by Paul Manafort, the former Trump campaign chairman.

“Whatever happened to Podesta?” Mr Trump said. “They closed their firm, they left in disgrace, the whole thing, and now you never heard of anything.” Mr Trump tried to put distance between himself and Mr Manafort, who was indicted in October. The president said that Mr Manafort – whom he called “very nice man” and “an honourable person” – had spent more time working for other candidates and presidents than for him.

Mr Trump said it was “too bad” that Jeff Sessions, the attorney general, recused himself from overseeing the Russia investigation. He did not directly answer a question about whether he thought that Eric Holder jnr, former president Barack Obama’s first attorney general, was more loyal than Mr Sessions had been.

“I don’t want to get into loyalty, but I will tell you that, I will say this: Holder protected president Obama. Totally protected him.” He added: “When you look at the things that they did, and Holder protected the president. And I have great respect for that, I’ll be honest.”

Mr Trump said he believed members of the news media would eventually cover him more favourably because they were profiting from the interest in his presidency and thus would want him re-elected. “Another reason that I’m going to win another four years is because newspapers, television, all forms of media will tank if I’m not there, because without me, their ratings are going down the tubes,” he said, then invoked one of his preferred insults. “Without me, the New York Times will indeed be, not the failing New York Times, but the failed New York Times.”

He added: “So they basically have to let me win. And eventually, probably six months before the election, they’ll be loving me because they’re saying, ‘Please, please, don’t lose, Donald Trump.’ Okay.”

After the interview, Mr Trump walked out of the Grill Room, stopping briefly to speak to guests. He then showed off a plaque that listed the club’s golf champions, including several years in which he had won its annual tournament. Asked how far he was hitting balls off the tee these days, Trump, who will turn 72 next year, was modest. “Gets shorter every year,” he said.