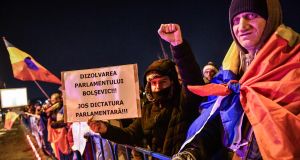 A demonstrator holds a placard stating “Dissolve the Bolshevik Parliament (Down with Parliamentary Dictatorship)” as people protest by the Romanian Parliament in Bucharest on December 21st, 2017. Photograph: Daniel Mihailescu/AFP/Getty

Deputies from the ruling Social Democrats (PSD) this week proposed to decriminalise abuse of power in cases involving state losses of less than €200,000, and the use of political office to obtain sexual favours.

Their draft Bill would also shorten prison terms for bribery and other forms of corruption, and allow custodial sentences shorter than three years to be served at home.

The sweeping proposals came just weeks after the PSD and its allies in parliament rammed through judicial reforms that have been criticised by the European Union and United States and tens of thousands of protesters who have rallied across Romania.

The latest Bill is seen as a PSD bid to revive changes that were blocked at the start of the year, when Romanians staged their biggest demonstrations since the 1989 anti-communist revolution to prevent any weakening of laws on corruption.

Civil society leaders representing 43 groups involved in the protests met Mr Tudose on Wednesday, and asked him to fire justice minister Tudorel Toader immediately and halt all changes to the justice system and criminal code until they had been evaluated by the Council of Europe’s Venice Commission of legal experts.

“The protests must continue until the judicial laws that were modified and adopted in December 2017 and the changes to the criminal codes are completely stopped,” Mihai Politeanu of the Initiative Romania group said after the talks.

“We delivered a very clear message . . . that Romania is on the brink of falling far from democratic standards and standards of rule of law, and that the prime minister must assume his responsibilities and use his institutional powers to prevent these major shortfalls.”

The PSD’s controversial push for reform is being driven by party leader Liviu Dragnea, who is on trial for abuse of power and is barred from serving as prime minister due to a conviction for vote-rigging. Last month, Mr Dragnea’s assets were frozen after he was accused of embezzling EU and other funds from state projects.

He denies the charges against him, but would benefit directly from the latest changes proposed by PSD deputies.

Mr Tudose has acknowledged difficulties in relations with Mr Dragnea, and earlier this year PSD deputies voted to oust a government led by one of their own colleagues after he became embroiled in a power struggle with the party leader.

Codrin Stefanescu, a deputy leader of the PSD, insisted that Mr Tudose’s meeting with NGO leaders did not cause any “earthquake” in the party ranks.

“By the nature of his job, Mihai Tudose is obliged to hold dialogue with absolutely everybody, regardless of whether he personally likes his partner in that dialogue.”

The Romanian government’s bid to tighten political control over previously independent institutions mirrors similar moves in Poland and Hungary, fuelling concern in Brussels over democracy and rule of law in eastern member states.