Trump officials ‘considered’ using troops to round up immigrants 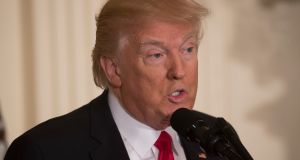 Donald Trump’s administration is considering a proposal to mobilise as many as 100,000 national guard troops to round up unauthorised immigrants, according to a draft memo. Photograph: Stephen Crowley/The New York Times

The Trump administration considered a proposal to mobilise as many as 100,000 national guard troops to round up unauthorised immigrants, including millions living nowhere near the Mexico border, according to reports.

An 11-page memo obtained by the Associated Press apparently calls for the unprecedented militarisation of immigration enforcement as far north as Portland, Oregon, and as far east as New Orleans, Louisiana.

Staff in the US department of homeland security (DHS) reportedly said the proposal had been discussed as recently as Friday, February 10th.

The other seven were Oregon, Nevada, Utah, Colorado, Oklahoma, Arkansas and Louisiana.

He called the AP report “100 per cent not true” and said there had been “no effort at all to utilise the national guard to round up unauthorised immigrants”.

A DHS official described the document as a very early draft that was not seriously considered and never taken to the secretary for approval.

Governors in the 11 states would have had a choice whether to have their guard troops participate, according to the memo, which reportedly bears the name of homeland security secretary John Kelly, a retired four-star marine general.

While national guard personnel have been used to assist with immigration-related missions on the US-Mexico border before, they have never been used as broadly or as far north.

The memo was apparently addressed to the acting heads of US Immigration and Customs Enforcement (ICE) and US Customs and Border Protection.

It could have served as guidance to implement the wide-ranging executive order on immigration and border security that Donald Trump signed on January 25th.

The draft memo, also dated January 25th, says troops would be authorised “to perform the functions of an immigration officer in relation to the investigation, apprehension and detention of aliens in the US”.

It describes how the troops would be activated under a revived state-federal partnership programme, and says personnel would be authorised to conduct searches and identify and arrest any unauthorised immigrants.

The draft document has circulated among homeland security staff over the last two weeks, and employees in several offices said discussions on the proposal were under way.

Nearly half of the 11.1 million people residing in the US without authorisation live in the 11 states, according to Pew Research Centre estimates based on 2014 census data.

Mr Trump’s executive order last month expanded the definition of which illegal immigrants could be considered criminals and therefore a potential target for deportation.

That order also allows immigration agents to prioritise removing anyone who has “committed acts that constitute a chargeable criminal offence”.

Spokesmen for the governors of Arizona, Utah, Nevada, California, Colorado, Oklahoma, Oregon and New Mexico said they were unaware of the proposal in the memo, and either declined to comment or said it was premature to discuss whether they would participate.

The proposal would extend the federal-local partnership programme Barack Obama’s administration began scaling back in 2012 to address complaints that it promoted racial profiling.

The draft memo also mentions other items included in Mr Trump’s executive order, including the hiring of an additional 5,000 border agents, which needs financing from Congress, and his campaign promise to build a wall between the US and Mexico.

The signed order contained no mention of national guard troops.

Mr Trump’s immigration strategy is emerging at a time when detentions at the nation’s southern border are down significantly from the levels seen in the late-1990s and early-2000s.

Last year, the arrest tally was the fifth-lowest since 1972.

Deportations of people living in the US illegally increased under the Obama administration, although Republicans criticised him for setting prosecution guidelines that spared some groups from the threat of deportation, including those brought to the US illegally as children.

Last week, ICE officers arrested more than 680 people across the country in what Mr Kelly said were routine, targeted operations.

However, campaigners said the actions were stepped-up enforcement under Mr Trump.