‘Trump is obnoxious but he is transformative’

Some residents of Little Havana, Miami, are turning their back on presidential candidate Marco Rubio, a local of the Florida suburb, to support Donald Trump. Video Simon Carswell 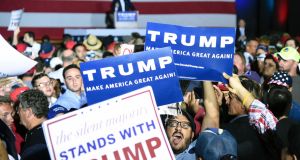 A protester is surrounded by Donald Trump supporters as he tries to disrupt a rally for Republican presidential candidate in Boca Raton, Florida, on Sunday. Photograh: Rhona Wise/AFP/Getty Images 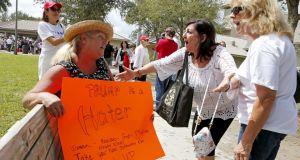 On one side of the road outside Donald Trump’s rally in Boca Raton, Florida, a group of about 40 protesters chant “No Trump! No KKK! No fascism! USA!” as his supporters file out of the event.

About two dozen Trump fans soon form a responding chorus on the opposite footpath across a narrow road.

“Get a job!” one shouts. “Do something productive,” yells another. “You’re a bunch of bums and losers, Communist losers,” calls a third. “We are going to win so much,” shouted another, repeating one of the businessman’s favourite lines from his stump speech.

The two groups are kept apart by a row of police officers keeping the road clear. “Pick a side,” says an officer, directing people onto a footpath.

“You have a really small head,” shouts one anti-Trump protester across to one of the businessman’s supporters. “We have jobs,” responds another to the taunts. “I am a teacher. I educate your kids.”

“Don’t vote for Hillary!” shouts one Trumper to the protesters. “Are you scared? She is a big educated woman,” responds a female protester, holding a sign: “Intolerance is a disease – get well soon.”

The heightened police presence outside the Sunset Cove Amphitheatre on a warm Florida evening prevented the post-rally protest turning into the kind of ugly skirmishes that led Trump to cancel his rally at the University of Illinois in Chicago on Friday night.

The Boca Raton rally was quieter by comparison, filled with Floridian conservatives in one of the state’s wealthiest countries. Only once was Trump interrupted by a “disrupter”, as he likes to call them.

His supporters had waited for several hours in the open-air arena for him to appear. When he did, he arrived, as is typical of the headline-grabbing reality TV star-turned-politician, with some fanfare.

He circled the arena in his “Trump” branded helicopter to an announcement heralding the arrival of the next president of the United States and a soundtrack of anthemic trumpets. The crowd loved it.

Taking to the stage moments later, Trump wasted no time in laying into the man he was here to beat: Florida senator Marco Rubio. The first-time senator, who trails Trump and Ted Cruz badly in state ballot victories, faces a do-or-die moment in Tuesday’s Florida primary, one of five big states voting. If he loses his home state, his campaign is over.

If Trump wins, he will take the state’s 99 delegates, the biggest prize of the day, propelling him towards the 1,237 delegates he needs to be the Republican nominee in the November’s White House election.

Trump started off, telling a boisterous crowd he had heard one of his warm-up speakers had done “a beautiful job explaining what a lousy senator you have”, criticising Rubio’s absenteeism from the US Senate.

“I tell you Marco doesn’t vote. You gotta go vote. You know, [it’s] interesting, you get elected to the Senate, you got to go vote on occasion. He set a record, one of the worst records in the last 10 years for no voting in the Senate,” he said.

The Washington Post fact-checked Trump’s oft-repeated criticism earlier this month and found that since the current 114th Congress began, Rubio has missed the most votes (147) of any of the three senators running for president: 39 more than Texas senator Ted Cruz and 90 more than Democratic candidate Bernie Sanders.

The polls have been mostly bad for Rubio. In a CBS poll published on Sunday, Rubio even fell to third place on 21 per cent behind Trump on 44 per cent and Cruz on 24 per cent.

Despite the polls, Trump, in Boca Raton, was taking nothing for granted, urged his supporters to go out and vote. “Let’s not say that we have a 20-point lead because I want you to vote. Let’s assume we are even,” he said.

The businessman again dismissed Rubio as “Little Marco” or “Liddle Marco”, as he spelt it out, to roars of laughter from the crowd. “You have to brand people a certain way,” Trump explained.

The businessman’s supporters are certainly no fans of the 44-year-old senator, until recently the Republican establishment’s big hope.

“Not a chance in the world,” said Mike Tomlinson, a hotel manager from Port Pierce, Florida, on whether Rubio will win the state today. “He has betrayed the people of Florida for many, many years. He is part of the establishment. The only reason he is doing it is they are throwing money at him to stop Trump.”

“He never really represented the interests of the state. It was all personally directed to his election,” said Dan Niejadlik, a retired physician who spends half his year in Florida where he votes.

This is the final year of Rubio’s Senate term so if he drops out of the presidential race, he will drop out of politics, at least temporarily.

“Rubio is probably done in government really. He’ll probably go get a big job at some law firm,” said Jody Allen (62), who sees Rubio’s co-authored 2013 immigration bill as “amnesty for the illegals”.

If defeated, Rubio will be the election’s latest casualty of the party’s establishment following fellow Floridian Jeb Bush.

Outside the Trump rally, Laura Roselione (38), a project analyst from Miami, standing on the protester side of the road, expresses concern about how far Trump’s “anger and hate” will bring him.

“I am terrified of how it is going to play out,” she said. “That’s why I am here today. It’s a shame this is what it’s come to with the Republican Party. Over many years they have created this person who is Trump.”

On the other side, Trump supporter David Caulkett (67), who is part of the Floridians for Immigration Enforcement, acknowledges that the businessman ruffles feathers but praises him for being the first person in 20 years to raise the issue of illegal immigration.

“Trump is obnoxious but he is transformative,” he said. “He has already changed the way politics and the electorate views elections.”

With that, Caulkett walked away, excited, to watch Trump lift off in his helicopter.