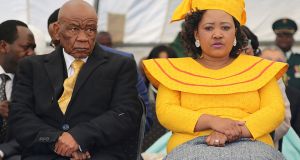 Lesotho prime minister Thomas Thabane has denied fleeing to South Africa just hours before he was to be charged in court with murdering his first wife, saying he left the country for a medical check-up.

The prime minister’s office released a media statement on Friday, shortly after Mr Thabane’s no-show in court in Maseru, Lesotho’s capital, saying he had gone to neighbouring South Africa for “urgent medical treatment” and would attend court upon his return.

However, neither court officials nor the police involved in the high-profile case were made aware of his intention to leave the country before the hearing, scheduled to start at 9am local time, took place.

Deputy commissioner of police Paseka Mokete told reporters outside the court that they had received unconfirmed reports that Mr Thabane was now in Pretoria, South Africa’s capital.

He said if Mr Thabane was out of the country for legitimate reasons, they would wait to resume the case against him when he returned.

“We cannot at this stage say he is contemptuous [of the court]. If it was established that the prime minister was trying to escape justice, the police would not hesitate to issue a warrant for his arrest, he added.

The dramatic development in the small mountainous kingdom surrounded by South Africa is the latest twist in a love-triangle murder mystery that has gripped the impoverished nation in recent weeks.

Lesotho’s current first lady, Maesaiah Thabane (42), was charged earlier this month with being responsible for the murder of her husband’s estranged wife, Lipolelo Thabane (58) in June 2017.

Lipolelo was shot dead, allegedy by a single gunman, while driving near her home in Maseru two days before Mr Thabane was inaugurated as prime minister for a second term in office.

Mr Thabane (80) has been accused of having acted “in common purpose” in the murder and police say they have a strong case against him. The authorities believe the first lady hired eight assassins to kill her predecessor, but that she was not present at the shooting.

Mr Thabane and the former first lady were going through an acrimonious divorce at the time of the murder. The prime minister and Maesaiah Thabane, who married two months after Lipolelo Thabane was murdered, have both denied being involved in her demise.

Amid mounting pressure over the case, Mr Thabane announced on state radio on Thursday that he would be stepping down from office at the end of July due to his age, but he did not mention the case against him.

“I’ve worked for a peaceful and stable Lesotho. Today ... at my age, I have lost most of my energy,” he said.

Last month Mr Thabane’s All Basotho Convention party, which is in a coalition government, called on him to resign by Thursday after police investigations linked his mobile number to communication records from the scene of the murder.