Paul Rusesabagina, who helped save 1,200 people during genocide, charged with terrorism 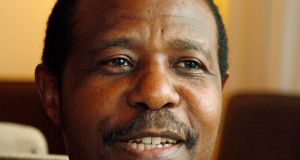 He was lauded as a hero internationally for rescuing more than 1,200 people during a genocide, his story told in the Academy Award-nominated film Hotel Rwanda, but Paul Rusesabagina is now locked up, accused of being a “terrorist”.

The 66-year-old’s family accuse the Rwandan government of kidnapping Mr Rusesabagina during a trip to Dubai, on account of his human rights work.

In contrast, the Rwanda Investigation Bureau says he is suspected to be “the founder, leader, sponsor and member of violent, armed, extremist terror outfits”.

Mr Rusesabagina was the manager of the upmarket Hôtel des Mille Collines, in Rwandan capital Kigali, which sheltered Tutsis during the 1994 genocide.

He was later played by Don Cheadle in the 2004 film Hotel Rwanda, which received multiple Academy Award nominations. In 2005, Mr Rusesabagina was presented with a US presidential medal of freedom by President George W Bush.

His daughter, Anaise Kanimba, told the BBC that her father, who lived in the US, had last contacted them from Dubai on Thursday. “I believe he was kidnapped because he would never go to Rwanda on his own will . . . That’s impossible.”

She said the “scariest part” is that his family has heard nothing from him, despite Mr Rusesabagina appearing on the Rwandan news in handcuffs. “We know that he’s been aware of [the risks to him] and that’s why he was in exile,” she said.

According to Ms Kanimba, Mr Rusesabagina is a Belgian citizen, as well as a US resident. “We would love for these two places to help to get him home and to get him back where he’s supposed to be,” she said. “The charges that they have on him are baseless.”

On Monday, the Rwanda Investigation Bureau tweeted saying Mr Rusesabagina was in their custody as a result of “international co-operation” and that he had been the subject of an international arrest warrant.

An Interpol spokesperson told The Irish Times by email that they do not comment on “whether an individual is, or is not, the subject of a Red Notice if one is not publicly available on our website”, adding that “any arrest in a member country is made by national authorities in accordance with their national legislation”.

In an editorial on Tuesday, the Rwandan government-linked New Times newspaper wrote that “the international arrest warrant that led to Rusesabagina’s apprehension has nothing to do with his fictional heroism that landed him accolades from different circles. Rather, it is the result of subversive activities that he would later get involved with, including creating and sponsoring terrorist groups that subsequently killed innocent Rwandans.”

Rwanda is regularly hailed as a success story due to the speed of its development since the genocide, 26 years ago, in which some 800,000 Tutsis and moderate Hutus were murdered in just 100 days.

However, opposition figures report being harassed, imprisoned or even hunted down abroad. Most recently, popular gospel singer Kizito Mihigo was found dead in a police cell in February, days after he was arrested and accused of joining terrorist groups.