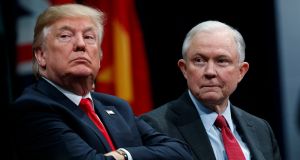 US president Donald Trump with attorney general Jeff Sessions during a graduation ceremony at the FBI’s headquarters in Quantico, Virginia, on Friday. Photograph: AP Photo/Evan Vucci

Tensions between Donald Trump and the FBI escalated on Friday as the US president described the behaviour of the agency as “disgraceful” as he departed the White House for an FBI graduation ceremony in Virginia.

Speaking on his way to a ceremony for law enforcement managers at the FBI national academy, Mr Trump said there was an extraordinary “level of anger” over the investigation into Russian interference in the election.

“There is absolutely no collusion, that has been proven,” he said, adding that even his “worst enemies” agreed. “I have nothing to do with Russia. Everybody knows it. That was a Democrat hoax. It was an excuse for losing the election.”

He also said the FBI investigation into the Hillary Clinton email scandal was “rigged”.

“When you see what’s gone on with the FBI and the justice department, people are very, very angry,” he said.

Though he did not specify which behaviour he was referring to, his comments come after a string of reports in recent weeks which his supporters believe show that the FBI and the ongoing investigation by special counsel Robert Mueller are biased against him.

Senator Ron Johnson, who chairs the Senate homeland security committee, obtained a draft text that former FBI director James Comey had prepared in May 2016 on the investigation into Ms Clinton’s use of an email server while she was secretary of state.

The draft show edits made by Mr Comey, which Mr Johnson believes show the FBI tried to downplay the seriousness of the alleged offence. In particular, he highlighted the changing of the wording from “grossly negligent” to “extremely careless”.

It comes days after the emergence of text messages sent by two former FBI agents who were involved in the FBI investigation into Russian interference in the election, which were highly critical of Mr Trump.

The revelations have fuelled accusations by conservative media commentators and several members of Congress that the FBI has an anti-Trump bias. But deputy attorney general Rod Rosenstein dismissed any suggestion of bias when he appeared before the House judiciary committee earlier this week, describing Mr Mueller as a “heroic public servant” who “based upon his reputation, service and patriotism” was an ideal choice to lead the investigation.

Mr Trump was also asked by reporters ahead of his departure if he would pardon Mike Flynn, the former national security adviser who pleaded guilty to lying to the FBI about contact with the Russian ambassador. He replied that he did not want to talk about pardons for Mr Flynn yet: “We’ll see what happens. Let’s see.”

Mr Trump struck a different tone when he addressed the FBI national academy graduation class in Virginia, praising the “incredible men and women of law enforcement” in a speech.

Meanwhile in Congress, Republicans moved closer to agreeing a major reform of the tax system, as the party made a last-minute adjustment to the Bill to win the support of Marco Rubio. Negotiators agreed to expand the child tax credit, as demanded by the Florida senator.

The prospect of a final vote on tax reform buoyed markets, with the S&P 500 and Dow reaching all-time highs on the back of the reported progress.

But uncertainty still surrounds the timing of the vote next week. Both the House of Representatives and the Senate need to vote on the Bill before it passes to the president for signing.

John McCain, who has been battling cancer, missed several votes this week in the Senate while he undergoes treatment in a hospital near Washington. Republicans have a slim majority in the Senate, controlling just 52 seats in the 100-seat chamber.