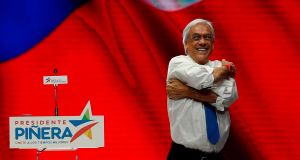 The final round in the most competitive election in Chile’s recent history hinges on turnout in a country where many voters are disillusioned with traditional politics.

Just a month ago, a victory for the billionaire Sebastián Piñera in Sunday’s presidential election seemed assured, sparking a vigorous rally in the local stock market this year after six years of stagnation.

But a sensational performance by radical candidates on both left and right in the first round of the elections last month has plunged the race into doubt.

The result – Piñera won with 36.6 per cent, compared to pollsters’ predictions of about 44 per cent, while Alejandro Guillier, a former television anchor, came second with 22.7 per cent – sent the stock market reeling, plummeting by almost 10 per cent in the following weeks.

“The right will win with abstention, the left will win with votes,” says Sergio Bitar, an adviser to Guillier, whose chances of victory are being taken increasingly seriously.

Critical for both candidates’ chances are the voters for the radical left wing coalition, Frente Amplio, that stunned pundits by securing 20.3 per cent of the vote, more than twice pollsters’ predictions.

“Many will vote for Guillier as they don’t want Piñera to win, but many will not vote at all,” says Javiera Parada, a leading figure in the Frente Amplio, estimating that the latter group could amount to about 30 per cent of her coalition’s voters. “They could be the 30 per cent that decide the elections.”

If the business-friendly Piñera secures the victory that investors were banking on, after becoming the first right-centre leader to win the presidency since the fall of Gen Augusto Pinochet’s dictatorship in 1990, he would join Argentina’s Mauricio Macri as another successful businessman-turned-president in Latin America.

It would also be the second time that he succeeds Bachelet in power, having followed her first 2005-2010 term. It would represent the latest shift to the right in Latin America, as a “pink tide” of leftist governments that came to power during the commodities boom since the turn of the century recedes.

“There [would be] something of a swing to the right, but it [would also be] a return to the norm, in that Piñera represents the ethos of the Concertación prior to [becoming] the Nueva Mayoría: free markets with strong social policy,” says David Gallagher, president of Asset Chile, an investment bank, referring to the centre-left coalition that has dominated Chilean politics since the return of democracy.

But Enrique Correa, a political consultant, argues that there is relatively little difference between Piñera and Guillier. “Not so much is at stake in this election ... Both candidates are actually pretty close to the political centre, and although they looked very far apart in the first round, their programme proposals in the second round are fairly similar,” he says.

He argues that despite stagnant growth the pillars of Chile’s economy – an independent central bank, a strong financial system and its openness to international trade – remain solid.

Meanwhile, most Chileans are relatively satisfied, although the growth of the middle class due to the commodity boom has left some fearful of falling back below the poverty line. This explains the strong demand in Chile for better health, education and pensions that have shaped the national debate in recent years.

But after new forces such as the Frente Amplio emerged in last month’s parallel legislative elections – after Bachelet’s electoral reform introducing proportional representation helped put an end to almost three decades of two-party dominance – the fragmentation of congress heralds a new era for Chilean politics.

That combined with a deterioration in trust in the political and business elite and a lack of consensus-building could become problems, says Correa.

“These used to be Chile’s strengths. Probably, even with the new demands of the new century, it would be good to go back to the tiring task of building trust and dealmaking, especially since Chile is [so close] to becoming a developed country.”