Trump-backed candidates struggle to cross finish line in US elections 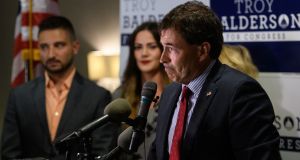 Republican candidates backed by US president Donald Trump clung to small leads in closely watched races in Ohio and Kansas on Wednesday, with the narrow margins serving as encouraging signs for Democrats heading into November’s elections.

Republicans looked likely to hold on to a House of Representatives seat in a reliably conservative district in Ohio, where Troy Balderson led Democrat Danny O’Connor by about 1,700 votes in a special election. It could take several days for a result to be declared as state officials count more than 8,000 provisional and absentee ballots.

In Kansas, staunch Trump ally and conservative firebrand Kris Kobach held a lead of less than 200 votes over current governor Jeff Colyer, in a Republican primary race that could take days or weeks before a final result is determined.

The narrow margin in Ohio – less than one percentage point separated Mr Balderson and Mr O’Connor – is little comfort for Republicans looking ahead to the November 6th midterm elections, as they outspent Democratic groups by more than four to one to retain a seat they have held for three decades.

“Moving forward, we cannot expect to win tough races when our candidate is being outraised,” said Corry Bliss, executive director of the Congressional Leadership Fund, a Republican Super Pac – or political action committee. “Any Republican running for Congress getting vastly outraised by an opponent needs to start raising more money,” he said.

Democrats performed dramatically better than expected in the last federal special election before the midterms, when Republicans are defending majorities in both the House and Senate.

Mr Trump took credit for Mr Balderson’s lead, writing on Twitter that his fellow Republican’s campaign took “a big turn for the better” after he campaigned for him in the district on Saturday. Mark Weaver, a Columbus-based Republican strategist who did not work for Mr Balderson, said Mr Trump’s visit helped fuel the party’s get-out-the-vote efforts in the race’s final days.

He added, however, that it will be harder to replicate that effort nationwide in November when Mr Trump and outside groups cannot focus on one specific race.

Other Republicans, including vice president Mike Pence and Ohio governor John Kasich, had also rushed to Mr Balderson’s aid in a district Mr Kasich once represented.

Tuesday’s vote mirrored special elections through 2017 and 2018, with suburban and urban turnout rates that have favoured Democrats exceeding turnout in rural areas where Mr Trump has a higher level of support. “If one side of the political divide sits on its hands in November, it will be a real problem for that party. And we know it won’t be the Democrats,” Mr Weaver said.

Mr Trump won the district in Ohio by 11 percentage points in the White House race in 2016. Republican Pat Tiberi resigned before finishing his term, triggering the special election.

The Ohio secretary of state’s office said it could not yet declare a winner. Absentee and provisional ballots cannot be counted for 11 days; an automatic recount occurs if the margin is within 0.5 per cent of votes cast.

On Wednesday, Mr O’Connor declined to say whether he would seek a recount if one was not automatically triggered. No matter the outcome, he and Mr Balderson will face off again in November to serve a full two-year term.

Democrats need to win 23 more seats in the House and two in the Senate to control Congress and put the brakes on Mr Trump’s agenda. All 435 House seats, 35 of 100 Senate seats and 36 of 50 governors’ offices are up for grabs in November.

Mr Kobach, Kansas’s secretary of state who was endorsed by Mr Trump in the waning days of the primary race, and Mr Colyer each had about 41 per cent of the vote on Wednesday.

Kansas state law allows for a recount if the vote margin is within half a percentage point, but the candidate has to request the recount. Absentee ballots must be postmarked by Tuesday and received by Friday; it is unknown how many ballots may be outstanding.

The recount process could take weeks, and could be complicated as different counties in Kansas use different voting systems, said Patrick Miller, a political science professor at the University of Kansas.

“There is the potential out there for a recount to shift a number of voters given the margins,” Mr Miller said.

Democrats are hoping to capitalise on dissatisfaction with deep tax cuts passed by former Republican governor Sam Brownback that led to a state fiscal crisis. Mr Colyer was appointed to the seat after Mr Brownback left office to serve in the Trump administration.

Mr Kobach has led a crusade to end what he describes as rampant voter fraud, even though very few cases have been prosecuted in the United States. He served as the co-chairman for a panel convened by Mr Trump to investigate voter fraud, which was later disbanded after most states declined to share information with the panel.

Three other states held nominating contests on Tuesday, including a battle for governor in Michigan in which mainstream Democratic candidate Gretchen Whitmer beat progressive Abdul El-Sayed. Ms Whitmer received more than half of the vote as Democrats angle to take back the governor’s office in that Midwestern state. – Reuters