Trump deal on occupied territories opposed by 80% of Palestinians

Almost two-thirds back Palestinian Authority’s rejection of US as mediator, poll reveals 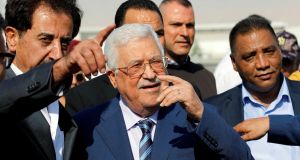 Palestinian president Mahmoud Abbas: has dismissed the Trump administration’s plan as the “slap of the century” and declared he will not commit “treason” by discussing it. Photograph: Mohamad Torokman

More than 80 per cent of Palestinians in the Israeli-occupied territories oppose the Trump administration’s “deal of the century” meant to bring peace between Arabs and Israelis, according to a new opinion poll.

Only 6.8 per cent of those polled by the Jerusalem Media and Communication Centre believe the deal, which has yet to be published, could have positive results for Palestinians. Another 60.6 per cent support the Palestinian Authority’s decision to reject the US as a mediator after its recognition of Jerusalem as Israel’s capital.

Palestinian president Mahmoud Abbas has dismissed the Trump administration’s plan as the “slap of the century” and declared he will not commit “treason” by discussing it. Due to Abbas’s refusal to budge, Palestinian negotiator Saeb Erekat has accused the US of seeking to oust him, bring down the Palestinian Authority, and divide Gaza from the West Bank.

Hamas, which rules Gaza, has rejected any proposed US deal, arguing that “All indications show that the deal violates our legitimate rights, mainly the right of return [of Palestinian refugees], liberating our land and establishing our independent state with Jerusalem al-Quds at its capital.”

Palestinian officials have denied Israeli and western media reports that key Arab countries, including Egypt and Jordan which have peace treaties with Israel, have put pressure on the Palestinians to accept the deal.

Egyptian presidential spokesman Bassam Radi said: “Egypt supports all efforts and initiatives to reach a comprehensive agreement, based on international resolutions made in the past and on the principle of two states for two peoples in the 1967 borders, with East Jerusalem as the capital of Palestine. ”

Jordan’s King Abdullah – guardian of Muslim holy sites in East Jerusalem – has said there can be no peace without Jerusalem as the capital of the state of Palestine.

Saudi Arabia’s King Salman has also rejected any plan that excludes a Palestinian state with East Jerusalem as its capital, or that contradicts the 2002 Saudi peace plan endorsed by the Beirut Arab summit which calls for full Israeli withdrawal from all Arab territory occupied in 1967 in exchange for peace and normal relations with the Arabs.

According to leaks, the “deal” would remove from the global agenda all the issues under negotiation since the 1991 Madrid peace conference: territory, Israeli settlements, Jerusalem, refugees and Palestinian statehood.

There would be no further Israeli withdrawal from Palestinian territory occupied in 1967. Israel would continue settlement activity and Jerusalem would be Israel’s exclusive capital.

Descendants of Palestinian refugees driven from their homes during Israel’s 1948 war would be removed from the rolls of the UN agency caring for them (UNRWA), leaving about 40,000 elderly refugees whose deaths would bring the demise of the agency. The majority of the five million refugees would be naturalised by host countries Jordan, Lebanon and Syria, which would receive Gulf financial aid to settle them.

If Hamas agrees to a permanent truce with Israel, Gaza would receive development aid supplied by the Gulf states. An industrial zone would be established in Egypt’s North Sinai to provide jobs for Gazans and locals and Gaza would fall under Egypt’s authority.

Instead of a state, Palestinians would be granted limited autonomy in West Bank Palestinian urban areas, 11 per cent of geographic Palestine, with their capital at the town of Abu Dis.